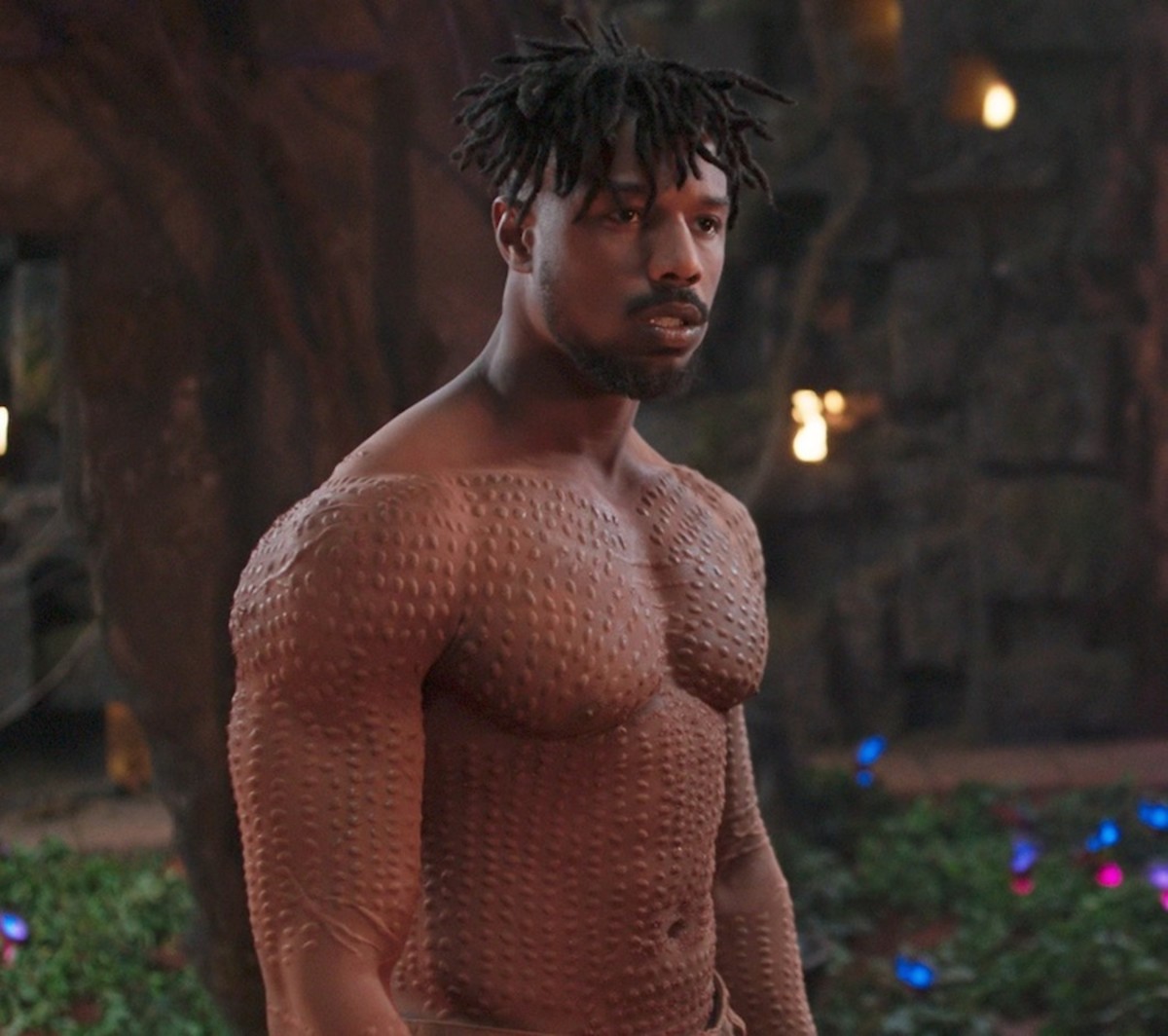 One of the recent movie debuts that hit the movie theatre’s is Black Panther with Michael B. Jordan starring in the role of Erik Killmonger – Tchalla’s (Chadwick Boseman) worst enemy. In case you haven’t already seen Black Panther, I honestly recommend doing it as it is a really good movie that’s having one of the best box offices of all the times and I think it definitely deserves it.
As a lot of people who have seen this movie, one of the hottest topics after the movie is the speculation on Michael B. Jordan’s physique. It is impossible not to notice his great change his body went through for this movie. That’s because… let’s just say that he got really “big” – as we can see in any of his recent photos.
From the research I’ve done, we managed to find that Michael B Jordan has gained around 24 lbs of pure muscle only for the Creed (where he is starring along with Sly Stallone which is another great movie that I would recommend to everyone) and he has gained another 15 lbs of pure muscle to play Killmonger in Black Panther.
With all of this being said, it is no wonder the question appeared – has Michael B Jordan ever used steroids in order to look the way he does in Black Panther playing Killmonger? Or maybe he’s just a natural man with a great workout plan alongside with great genetics and a good dieting plan? We are going to do our best in order to find evidence proving one side or another and determine if Michael did ever used steroids or he has been natty.
You can take a quick look at the way he looks in the movie by writing in youtube search function: Killmonger challenges T’Challa.

Taking a look at his gains history

It is obvious that those men who are starting to workout are going to see a big increase in muscles in a matter of a few months of doing it and you don’t need to be on steroids to achieve this. Those guys can see a gain of roughly 20 lbs of pure muscle when they firstly start to lift weights, however, after this, they will notice that this effect start to fade and their gains will be much slower for the rest of their lives. The reason why many decide to use steroids is because the gains process is much prolonged by using steroids. In other words, natural people won’t really see any significant amount of muscle gains after they have experienced their “newbie gains” which usually doesn’t last more than a year.
Now let’s take a look at his gain history. Michael B Jordan, as I earlier mentioned, has gained 24 lbs of pure muscle for his debut in Creed – another great movie. I think that this is 100% possible and all normal for a natural guy with a good dedication and workout plan when he firstly starts to hit the gym at least 4 times a week with some big compound movements which does seem to be the case for Michael as he never seemed to need to hit the gym for any of his previous roles. Therefore, I can say that there are very low chances Michael used anything for his role in Creed and I do think that he was 100% natural. Everyone can take a look at his photos in movie Creed where his body composition indicates he’s all natural as he definitely doesn’t look as big as he does in Black Panther, he’s just ripped – something normal for a natural guy. 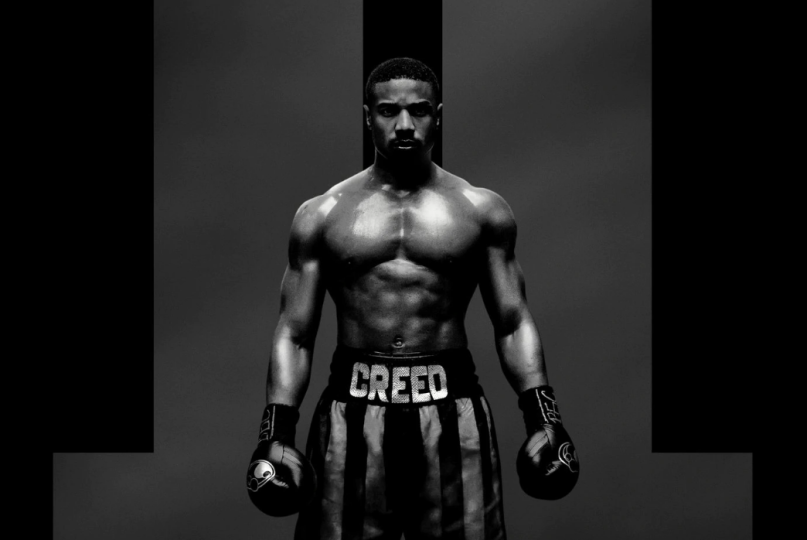 But, what’s making me wonder is the fact that it seems his muscle gains didn’t stopped at all after the movie Creed as it seems that he continue growing and getting more and more gains. You can see interviews with Michael before the Black Panther debut where he says that he wanted to become exactly as big as Killmonger was in the comics, and as we can see, Killmonger was really BIG, and it does seems that Michael achieved his goal.

What I think is that in order to achieve such a goal, Michael B Jordan would need to use steroids otherwise it would be near to impossible for a guy like him to get such gains and especially in such a period of time. I think that this is mostly due to the fact that his building muscle genetics aren’t really great. I made this conclusion based on how he looked in Creed and I doubt that you need to be an expert to notice this. It is all due to the fact that he is not looking very big after he has been under an intense weight training protocol he went through. And right now I’m not trying to say that he wasn’t looking good, he did had a body many would envy, however he was just lean.
With this being said, I do think that he needed to add something in order to continue growing. He had to use something like a short steroid cycle in order to add more size and mass that he gained between the 2 movie debuts. I think that this is how we can logically explain how he has been able to grow another 15 lbs of pure muscles without stopping the muscle grow process even after “newbie gains”. All in all, I would say that Michael B Jordan’s gains history looks like it is more a steroid user and not somebody who has been natural.

If you’re going to take a close look to Michael B Jordan, I doubt that anyone would be able to see a lot of obvious signs of steroids use as this guy doesn’t have any of the most common side effects of using steroids such as gyno, acne or a classic steroid gut. Nonetheless, there are still some signs such as the fact that he has a big of bloating in his midsection which is typical for steroid users and in his face – something that he does seem to have in Black Panther playing Killmonger but not in Creed. 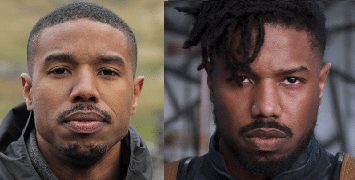 Just look and compare the 2 photos with Michael B Jordan’s face before Black Panther and during it. we can notice that he is retaining some water and this is giving a rounder shape to the face. Retaining water is another sign of steroid use. It is obvious we are only talking about a small amount of fluid retention but that’s just something normal when we are talking about using some anabolic steroids, especially in normal / reasonable quantities which I think is obvious in Michael’s case.
In addition to that, he does seem to have the bloating side effect as well. A little bit of bloating in the midsection part is a common side effect and it is pretty particular for those people who are using bulking steroids. This does seem to be the Michael’s case where he does have a bit of bloating and a bit of smooth looking when the actor is relaxed. 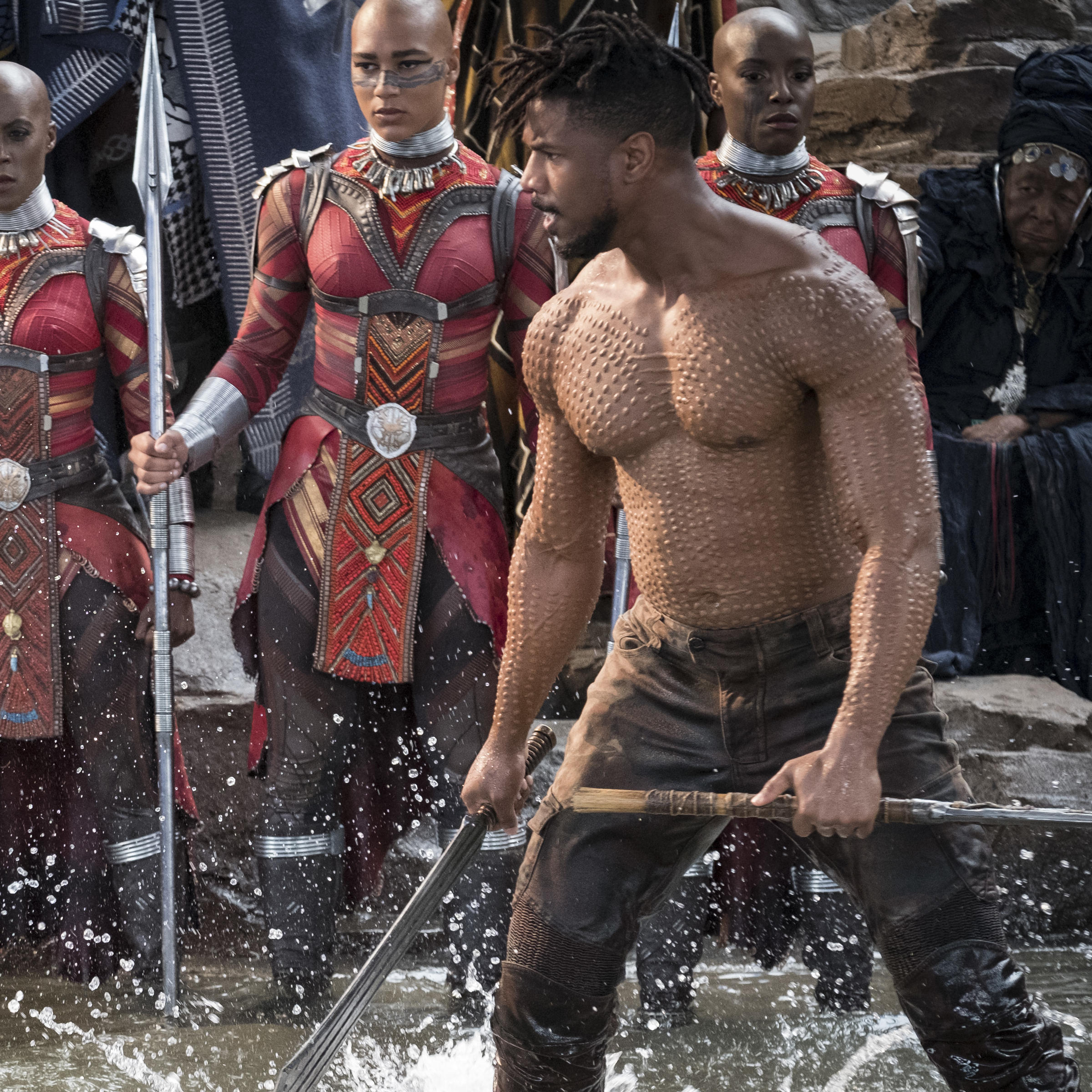 So what’s the conclusion – did he used steroids?

Even though there are few chances we could be wrong, based on all the evidence that we managed to find out about Michael B Jordon, we can say with quite a big probability that the actor may have used steroids in order to get so much jacked for the role Killmonger in Black Panther. We doubt that he has ever used steroids before the role in Black Panther as there is no sign of that. 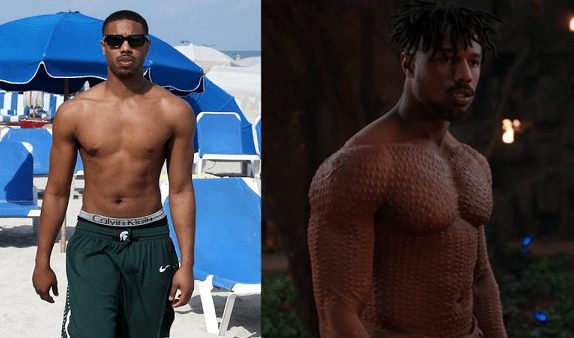 There are some signs pointing towards him using steroids and one of them is that only steroid use make reasonable sense of how he managed to gain his extra 15 lbs of muscle on the top of those 24 lbs that he previously gained for the other movie role. All in all, he managed to have a total of 39 lbs muscle gains which is twice as much that a natural guy would experience. With this being said, if he would have been absolutely all 100% natural, then I doubt he would have managed to gain those extra 15 lbs of pure muscles after he has already experienced his newbie gains which is the only time when you see a muscle growth spike. That’s all unless he has done an extremely aggressive bulk or if he has increased his training frequency to at least twice a day every day, something he didn’t do.
You may wonder how do I know that he didn’t do neither of that? Well, an aggressive bulk means that you need to increase your body fat percentage by approximately 10% and after that you would need to perform a cut. By staying natural, you can only achieve such a result in several months, and that’s in the best case depending on your body etc. plus to that, this doesn’t even ensure that you would indeed have the preferred gains.
So, based on his gains history that I analyzed and based on the 2 most common side effects of steroid uses that Michael B Jordan seem to have in Black Panther movie – the bloating and the water retention – he does seem to have used steroids. I doubt, however, that he has ever used them before the Black Panther as he doesn’t have any signs of steroids intake at all during his role in Creed.

What Steroids Michael B Jordan has used for the Black Panther?

In order to become Killmonger from the Black Panther, I believe that Michael had to use steroids and based on what I managed to find out, I believe that Michael could have used such steroids as dianabol, testosterone or deca durabolin.
Many may disagree with me saying that typically, after a steroid user would run several steroid cycles then you would see a gain of approximately 50 lbs of lean muscles, but as I already mentioned, Michael B Jordan has only gained 15 lbs. Well, I believe that there’s a chance he has only done 1 cycle for the little gain he needed. Or there’s a chance that he used same – type of steroids but a bit weaker. But in case he has only done 1 cycle then there’s a chance he has used D Bol or testosterone.
However, the actor did run several cycles, which we can’t determine, of course, then I think there are more likely he has used the deca durabolin and that’s mostly due to the fact that this steroid is not going to help you in building up as much muscles as D Bol or the testosterone would. Nonetheless, that’s still an amazing stuff in helping you to add a pretty good amount of size and fill out your muscles, something which does seem to apply for Michael B Jordan.
Warning: If there’s someone reading this article thinking that they may achieve same results as the actor did only by using steroids or thinking that all the actor’s credits go to the steroid use then I need to say you’re wrong in both cases. I think that being an actor requires a lot of dedication and by far not everyone can become one. Steroids does not give you any actor based skills. Plus, nobody would ever achieve such results Michael Jordan did by only using steroids without an extremely well made workout and dieting plan. Steroids are only a little boost to what’s the most important to have a bodybuilding body: workout and diet.
PS: I have seen both Black Panther and Creed and I do think that those are movies worth watching as I recommend them to everyone who haven’t yet seen them.
Special thanks to the following sources for helping us writing this article:
Google.com