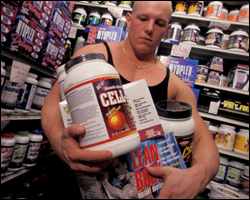 In the last instalment, I discussed the massive scientific support for using creatine monohydrate, addressed some very common myths about it and talked about how and when to take it and whether you should cycle on and off it. Now I’ll address the different kinds of creatine and what you should be taking with this proven muscle-builder to ensure you get the absolute maximum results from your gruelling sessions in the gym.

What Type of Creatine Should You Use?
This has to be the most controversial creatine topic because there are a few companies who are selling millions of dollars worth of fancy new creatine products that may not be any better than plain old creatine monohydrate. Here’s one important fact that everyone should know about creatine – regular creatine monohydrate is absorbed virtually 100 percent from the digestive tract. This has been known for over 90 years and anyone who says otherwise is NOT an expert on creatine. So if you see a creatine product claiming that it is ‘absorbed’ better than regular creatine monohydrate, you should be sceptical to say the least. Because creatine is fully absorbed from the gut, the trick is to increase the ‘uptake’ of creatine from the blood into the muscle and that can only be done through increasing the levels of certain hormones and cellular transporters in the body (more on this later).

What About Liquid Creatine?
You may have heard one of the many stories about creatine breaking down in liquid and even that this may be harmful?! The most important thing to know about mixing creatine and liquid is that unless you mix it in liquid and then leave it for several days before you drink it, there is no reason to worry. One or two unscrupulous companies have tried to scare bodybuilders into thinking that the second their creatine is mixed with water or taken by mouth, that it starts rapidly transforming into its breakdown product called creatinine. This is simply wrong. Also, creatinine is not harmful, it is just a useless by-product of creatine as it gradually breaks down in water. In fact, the evidence was so clear on these topics, that the Los Angeles State Court found that such claims made by one of these liquid creatine companies were ‘false’ and ‘deceiving’.

So do a little research before you buy a liquid creatine product! There are only two ways to successfully stabilize creatine in liquid: 1) make the liquid more alkaline (less acidic) – it has been known for decades that things like baking soda, calcium and magnesium will slow creatine breakdown by making the liquid less acidic 2) putting the creatine in a “pod” that keeps it dry until the container is opened (I don’t think anyone has successfully brought this type of product to market yet although attempts have been made).

What About Caffeine?
The combination of creatine with caffeine was first studied because caffeine may enhance some of the systems that could increase creatine delivery into the muscle cell. However, in one study the results seemed to show that exercise performance was poorer in the group that loaded creatine while taking caffeine. Before you quit drinking coffee, let’s get something straight, this study and others have shown that caffeine does not decrease creatine absorption and retention. There are a variety of reasons why these results may have occurred. Perhaps it was because the subjects stopped taking caffeine for 20 hours before the exercise session, so they may have had caffeine withdrawal. Whatever the reason, it’s probably fine to take caffeine with creatine. In fact, some of the early creatine research gave subjects their creatine in caffeinated drinks and got positive results.

So What Actually Works?
Only a few nutrients have been demonstrated to improve the performance of creatine and increase creatine levels in muscle. One is a large amount of carbohydrates – especially dextrose – another is alpha lipoic acid. Large amounts of carbohydrates amplify levels of the hormone insulin, which can lead to 60 percent greater creatine retention over plain creatine alone. Addition of lipoic acid can also significantly increase creatine levels in the muscle over creatine alone.

The biggest problem with most of the creatine plus carbohydrate formulas on the market is that they don’t contain a high enough dose of carbohydrates. As a matter of fact, many creatine plus carb products may not work any better than regular creatine with water. Studies have even shown that 50 grams of carbohydrates is not sufficient to significantly increase creatine retention, yet most products contain even less than that33! The minimum amount of carbs you need to take with creatine is 75 grams, as this is the lowest amount that has consistently been shown to be effective. Alternatively, a combination of 50 grams of carbs with 50 grams of protein has also been demonstrated effective (I would go for 30-40 grams of whey protein with 70-100 grams of carbs if you train hard and heavy). Many companies are “afraid” to add this amount of carbs to their products, despite the fact that this is what really works for maximum strength and muscle gains. As I’ve said on many occasions, don’t be concerned about eating too many carbs – even sugary carbs – if you want to gain muscle! This especially applies to post-workout. Large amounts of carbs with protein and creatine are a no-brainer. Even if you are dieting, the one time you should be having large amounts of carbs is post-workout. Don’t worry, unless you train like a sissy, they won’t be stored as fat, they will simply maximize your recovery from training!

So now you are equipped to get the best results from the world’s most proven sports supplement because you can separate the facts from the myths and make the correct decisions based on the real facts from the legitimate research. So simply follow the advice given above and be prepared to grow!