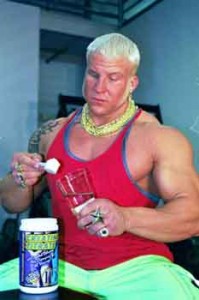 Despite being the most researched and proven sports supplement ever, most people don’t have all of the facts straight about creatine. The main questions I get asked are how and when to take it, is it safe? should I cycle? what should I take it with? What shouldn’t I take it with? and about the different forms of creatine. In the following two-part article I’ll address all of these questions and more, so that you can make the best choices around your creatine use and that means that you’ll be able to get the best possible results from your efforts in the gym!

First off, let’s go over the basics. There is no reason for me to bang on about the benefits of creatine. It is so effective at building strength and muscle (if used properly), that even the extremely restrictive UK advertising authorities have allowed companies to make these kinds of claims about it. More impressive is the fact that there are over 3,000 studies on creatine and exercise! So creatine is without question the real deal.

Next, let’s get the safety issue out of the way. As long ago as 2000, a roundtable of 12 of the world’s foremost creatine experts found “no definitive evidence” that creatine has any side effects whatsoever and the results were published by the American College of Sports Medicine. One study even found creatine to be safe when subjects took it for up to five years and as much as 80 grams per day! Actually, in some studies, the “placebo” group (that didn’t get creatine) reported more negative effects than the creatine group.

What about injuries, cramping, bloating and water retention? The answer is that creatine has no such effects. For example, sportsmen who used creatine had, “fewer cases of muscle pulls or strain, missed practices due to injury, and cramping” and they didn’t get any bloating. A study in the British Journal of Sports Medicine notes that creatine actually increases athletic performance in hot and humid conditions by helping to regulate temperature, sweat rate and heart rate in exercisers.

Finally, creatine may cause some water retention in the muscle (although the bulk of the evidence doesn’t support this) but it doesn’t cause you to hold water under the skin or make you look “soft”. Any increase in water with creatine use occurs in the muscle. Most bodybuilders are on creatine all year round, including contest prep because it makes them look bigger and fuller and prevents muscle and strength loss when dieting. So I suspect that rumors of creatines’ “side effects” have come from a few unscrupulous companies who are selling new fancy types of creatine that they claim don’t have these alleged side effects.

How should You take Creatine?
Some research done by two of the world’s most experienced creatine scientists concluded that it is “likely” that taking as little as three grams of creatine per day for four weeks could have the same results as loading. However, other studies found no increase in muscle creatine levels using two grams of creatine per day – even after six weeks. In another study, subjects who loaded with creatine and then used a maintenance dosage of five grams per day for 11 weeks lost over half of their creatine stores! So in this study, the five-gram maintenance dosage just didn’t cut it. On the other hand, there are stacks of research on the original five-day, 20 gram per day loading protocol. For this reason and others, I would strongly recommend loading creatine over a five-day period followed by two 5 gram servings per day for maintenance (or 2 doses on training days and 1 on non-training days). You may also want to “reload” every few months even if you’re already on a “maintenance” dosage. 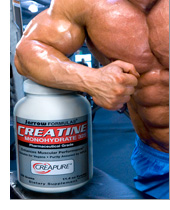 Should You cycle creatine?
It used to be recommended that you use creatine for two or three months and then discontinue it for a month or two. This is an old-fashioned approach left over from the days when little was known about the consequences of long-term creatine use. There is now no good reason to cycle off creatine unless you have some kind of kidney disease or other illness (in which case you shouldn’t be using it at all).

Another reason cited for taking time between creatine cycles was the theory that it would cause down-regulation of the creatine transporter (causing less creatine to be taken up by the muscle). This was never more than a theory based on a study done on rats in 1988. Since then, a thorough study has been done in humans and it was found that no down-regulation occurred.

When Should You Take Creatine?
The best time to take creatine is probably immediately after a workout and in the morning when your insulin works most efficiently. You see, creatine stores in muscle are heavily depleted after exercise and the body has a clever habit of replenishing things best when levels are low. This seems to be the case with creatine also. If you aren’t taking a creatine product that contains carbs like dextrose, maltodextrin, waxy maize, etc, then be sure to have a big meal as soon after your dose of creatine as possible because protein and especially carbs increase insulin levels in the body, which forces more creatine into the muscle.

In Part 2, I’ll discuss the different types of creatine, what you need to know about mixing creatine with water, mixing it with caffeine and then conclude with the best advice regarding the best ways to take creatine and what to take it with.