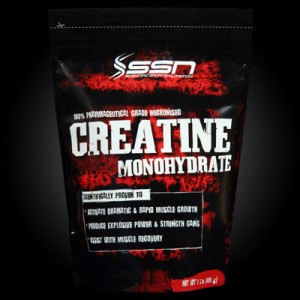 Creatine monohydrate (methylguanidine-acetic acid): is a substance produced by our organism with the aim of energy potential replenishment. It’s synthesized from arginine and glycine in the liver, pancreatic gland and kidneys. We can find get it from meat and fish.

Recent researches showed that the more muscle creatine is stored in cells the more the ATP molecule recovery speed is and, consequently, the higher muscle energy potential is.

It’s known that Creatine monohydrate intensifies protein synthesis in muscular cells (due to additional water inflow) making them stronger and increasing their volume. In the result of this, muscles become ‘superhydrated’ and it causes increased synthesis of protein and glycogen and reduces the probability of protein damaging.

When and how should we take Creatine monohydrate?

If you have never tried it before you can start with ‘heightened’ doses of 5gr 4 times a day during 5 days. This will lead to significant increase of Creatine monohydrate in your muscles. After this ‘charging’ phase you should switch to a regular 5gr of Creatine monohydrate 40 minutes before a training session and 5gr in rest days.

The idea of ‘charging’ lies in the fact that you take increased doses of Creatine monohydrate during several starting days; after this you take ordinary doses for a period of several weeks. Researches showed that this taking method guarantees the maximum effect. The most optimal variant of ‘charging’ is given below:

2gr a day during 5 weeks