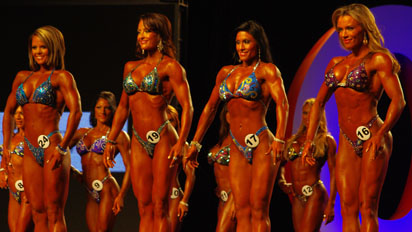 With the announcement that the bikini division will be a mainstay at Olympia Weekend, it is time to separate the classes right down the middle. Bodybuilding shows should be just that and both the men and women’s finals should be held together the same night. The prior evening can be for the fans of the newer – and less hardcore – divisions such as fitness, figure and bikini.

Listen – I personally have no problem whatsoever looking at women barely dressed cavorting on a stage and not feeling guilty about it, but for the sake of the sports world, bodybuilding differs greatly from the other three. As a man, staring intently at someone like Heather Mae French and calling it work is a great thing. But when I put on my sportswriter’s hat, it just doesn’t cut the mustard.

Interviewing Dennis Wolf or Iris Kyle is the other end of the spectrum. No knock against the smaller, svelte figures out there, but it’s similar to comparing an offensive lineman and a tennis player. Both are professional athletes, but prepare for their jobs completely different.

Surely, the marketing strategy has been to separate the women’s bodybuilding from the men’s so that ticket sales would be equally distributed both nights. But in the past few years, women’s bodybuilding has become less popular and only followed by a niche group of fans that seems to shrink more and more. The three other categories have grown in popularity and surely can handle the headliner spot now without suffering at the box office.

Using this strategy, the more mainstream audience would have their own night and the old school will not have to sit around for hours on end waiting for the completion of a contest. The best of both worlds, if you will.

There is certainly a place for fitness, figure and bikini. But just not on the same stage, same night as bodybuilding.