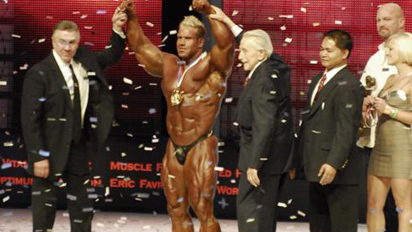 Taking his place on stage along side 10 men who have also won the Mr. Olympia, Jay Cutler must have felt something special in the air. The evening began with a collection of greats who have triumphed in the contest since its inception in 1965 (minus Arnold Schwarzeneggar, who was unable to attend but recorded a speech) and took their place around The Master Blaster himself, Joe Weider.

The announcement of his name at the end of the show was still nearly three hours away, but Cutler appeared cool and confident each time he came under the bright lights. He certainly had a few things to worry about, especially from someone so close to him.

“Phil Heath is my best friend in bodybuilding,” said Cutler, “and he’s starting to catch up to me.”The man known as The Gift sure is and took the runner-up spot behind his confidant and mentor. Branch Warren, who finished second last year, placed third. Dexter Jackson may have seen his best days already, but The Blade proved that he has plenty left in the tank, placing fourth.

The next two were very interesting. Dennis Wolf completed a shocking comeback by finishing fifth after not even placing in 2009. A beaming Wolf said upon his exit from the arena, “It was good for me.” And Ronny Rockell, who has been coming closer and closer each time, joined the top six for the first time. Kai Greene was lucky to take seventh with his roundness and Victor Martinez – who was in danger of dropping out of the top 10 after pre-judging – came in harder at the Finals and placed eighth. Both were unpopular decisions with the crowd, but were the right ones, nonetheless. Rounding out the top 10 were Toney Freeman and Hidetada Yamagishi.

In the 202 Showdown, Kevin English and David Henry took their rivalry to a new level. Henry appeared to have better definition but English had him in size. These two men just do not like each another and displayed as much on the side of the stage by not even acknowledging the other as they stood side-by-side waiting for the official announcement. It was apparent by his reaction that Henry was greatly disappointed. Eduardo Correa finished in third, Jose Raymond fourth, Jason Arntz fifth and Jaroslav Horvath sixth.

In the Figure Olympia, Nicole Wilkins Lee was unable to repeat as champion and Erin Stern took home the crown.

202lbs and Under Results