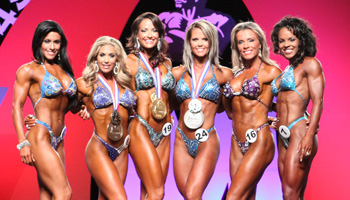 It was as close a battle as any we’ve seen on the Figure Olympia stage, but when it was all said and done, a new champion emerged as Erin Stern edged out 2009 winner Nicole Wilkins-Lee in a down-to-the-wire finish that was one of the most exciting in the sport’s history.

Stern has been rising steadily up the ranks since she won her pro card at the 2008 NPC Nationals. She placed sixth here last year and won her first pro show, the Europa Show of Champions, earlier this April.

After placing second to Wilkins-Lee at the Figure International in March, there was little question that the two would be the marquee matchup in Las Vegas. At yesterday’s prejudging, Stern showed slightly better details and hardness while Wilkins-Lee sported a bit more roundness and fullness.

In the end, Stern’s long lines and lean, athletic physique prevailed as the 30-year old from Ocala, Florida became only the fifth competitor to wear the Figure Olympia crown in the eight-year history of the sport.