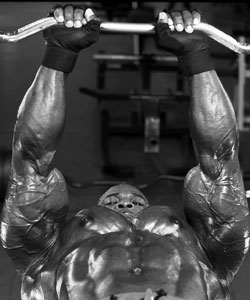 Q: My biceps are big, but my triceps are underdeveloped, even though I’ve spent plenty of time training them. What should I do?

A: Underdeveloped triceps are one of the most common problems among beginning and intermediate bodybuilders, but one that is accompanied with a 100% cure rate for those who are serious about solving it. In order for that to happen, however, keep the following in mind.

Bodybuilders don’t train what they can’t see. At the next contest you watch, notice that the most neglected bodyparts among competitors are their lats, erectors, upper back and traps, rear delts, biceps brachialis, hamstrings, calves and triceps. That’s because they tend to train hardest those bodyparts they see in the mirror when they pose, namely, biceps, chest, front delts and quads.

Until your triceps have closed the gap, hit them heavy and hard with at least 16 sets per workout, with a rep range of eight to 10. A good workout would be close-grip bench presses, seated one-arm dumbbell extensions, triceps pressdowns and dips. Every three or four weeks, throw in a shock routine, going through one of these workouts in giant-set fashion: one set of each exercise nonstop, in a round-robin format, until you’ve completed all four sets of all four exercises — 16 sets nonstop.

With every repetition, get the fullest range of motion possible (this is more crucial for triceps than for any other bodypart) and take each set to failure, which means not being able to complete a full rep. Summon your maximum intensity, power, strength and endurance for this new program, then make sure you never again fall below that level.

Forget about how your triceps are growing. Instead, enjoy going into the gym just for the sensation of training and the thrill of trying to break your old record. The only way I got to where I am today is by not even thinking about being Mr. Olympia. My first 13 years of training were spent as a powerlifter, simply because lifting those heavy weights felt so good. When I switched to bodybuilding, I had no intention of becoming a pro; I just loved the variety of muscle pumps I got from this new style of training. Even after I turned pro, nothing changed in my life. My love of getting into a brutal workout, where nothing was on my mind except smashing through the exhausting pain and feeling like a conquering hero afterward, was my sole motivation. If yours is the same, huge triceps will be only one of the many blessings that you can expect from this amazing journey.

* Warm up with two light sets of 30 reps before commencing this workout.