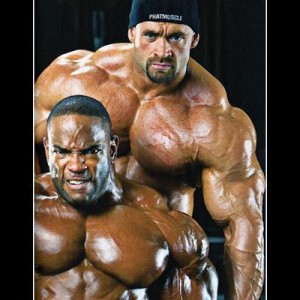 Bodybuilding is not an exact science. On the contrary, you must continuously challenge your muscles, and sometimes this even calls for breaking bodybuilding’s most hallowed rules. This article explains why and how five of them can be occasionally broken. It is intended primarily for intermediate and advanced bodybuilders: Beginners will be better served by adhering to the edicts.

MODERATE AND LOW REPS ARE BEST
Moderate repetitions (eight to 12) are recommended for most exercises, and going even lower (four to seven) for compound lifts will boost mass and strength.

WHEN AND HOW TO BREAK IT The problem with always keeping your reps in a comfortable range is that your muscles also become comfy and therefore have less need to make dramatic changes. What if instead of eight reps in a pulldown set, you do 30, and what if instead of 12 reps of standing calf raises, you do 100? If you go to failure each time, your lats and calves will probably be sore the next day and, in subsequent days, will probably grow to compensate. This isn’t a call for a subtle change from 10 reps to 15 reps. This is a call for shock therapy, a sneak attack — the sort of marathon set to exhaustion that your muscles are least expecting. Forget the rules: Don”t be afraid to reduce your standard weights in pursuit of pushing your reps very high — into the 25-to-100 range — for a set or two on occasion.

If done periodically, say once per month per bodypart, very high reps can jump-start stubborn muscles toward new size. They can also rescue a sputtering workout.

TRAIN LARGER BEFORE SMALLER
For example, don’t train triceps or delts before chest, biceps before back, or forearms before any other upper bodypart. The logic behind this tenet is that if you exhaust a smaller muscle before a related larger muscle, the former will rob strength from your training of the latter.

WHEN AND HOW TO BREAK IT This is a very good rule and should seldom be broken. If, say, your triceps are a weak point and your pecs a strong point, you could train triceps before chest, but only if the pec workout did not include many compound lifts (presses and dips). In the real world, the odds that such a plan would benefit you are slim. There is, however, one clear-cut example when the large-before-small pattern can be reversed: hamstrings before quadriceps. Because leg biceps often lag behind quads and play only a supporting role in quad work and because they’re large enough to absorb extra attention, it’s sometimes advantageous to stress them via leg curls and then give them further work during compound quad lifts like leg presses, squats and lunges. Training straggling hamstrings before quadriceps can help bring the former in balance with the latter.

STICK TO A ROUTINE

This is an excellent rule for beginning bodybuilders who need to learn training discipline and make certain all muscles are properly worked.

WHEN AND HOW TO BREAK IT Not only can this rule be broken, but it should be broken by most intermediate and advanced bodybuilders. A training routine is not a road; it’s a road map. There are many ways to get where you’re going. Sometimes the most effective route is to get off the beaten path and try something different, so your muscles don’t fall into the nongrowing syndrome of getting used to a certain workload. Don’t be afraid to change your routine regularly, perhaps even weekly. Many champion bodybuilders do a unique array of exercises, sets and reps each time they work a bodypart. Thus, their muscles never become accustomed to the same thing. They utilize the Weider Instinctive Training Principle and listen to their bodies, sometimes pushing harder, sometimes not so hard, sometimes incorporating a surprise attack strategy and sometimes taking an extra day off to fully recuperate. Others choose to follow essentially the same workout plan for months or even years, but even they should be willing to occasionally do something completely different to shock complacent muscles toward new growth.

STICK TO A DIET
Whether restricting calories and fat to lose weight or maintaining a high-protein nutritional plan to gain muscle, persevering on a healthy dietary course is certainly sound advice.

WHEN AND HOW TO BREAK IT Violating this rule is literally a piece of cake (or pie, if you prefer). You don’t need CNN to tell you that too many people jump off their diets all too frequently, thus negating positive effects. However, a rare “cheat meal” can make staying on course easier. It may also benefit your body. In addition to satisfying your urge for calories and fat, an occasional slice of pepperoni pizza may recharge a slowed metabolism, helping you to lose still more fat and/or gain more muscle when back on a low-calorie, high-protein diet. If nothing else, it certainly breaks up the monotony. The key is limiting cheat meals to once per week at most. Also, refrain from gorging yourself.

The dictum that squats, bench presses and other free-weight compound lifts are the best exercises for building mass is accepted wisdom in hardcore gyms around the globe.

WHEN AND HOW TO BREAK IT It is true that building your program around heavy basics is the fastest proven route to maximum mass. However, there is an illogical converse to this rule: Avoid isolation lifts when trying to get big. A popular myth holds that cable crossovers and concentration curls are “finishing moves” to be done only when polishing a physique for a contest stage or a summer on the beach. Politely put: Balderdash! Some lifts do provide for a greater peak contraction, thus accentuating muscle separation and shape, but they all build mass to varying degrees. Your muscles don’t know one exercise from another. They simply respond when stressed.

Yes, free-weight basics will generally stress your muscles best. However, if you haven’t done cable crossovers lately, chances are you’ll get a greater benefit from including them in your next chest workout than from doing the same four sets of eight bench presses you always do. Likewise, instead of your standard quad session built around heavy squats and leg presses with a few sets of leg extensions thrown in, try doing, say, leg extensions for 10 sets of 50 reps. If you go to failure each marathon set, those 10 sets may be enough for your entire quad workout. Warning to Mr. Hardcore: You may have trouble walking the morning after this “wussy workout.” A similar session every month or two can supercharge any bodypart. If you’ve designed your program primarily around free-weight basics, try making neglected machine and isolation lifts the focus of occasional workouts, and you’ll soon know there’s more than one way to build mass.

WHEN AND HOW TO BREAK IT Calves and abs are sometimes trained more frequently, sometimes even daily, but otherwise this rule is seldom broken. It doesn’t even occur to most iron pumpers that they could work their legs or back two days in a row or twice in the same day. That dreaded word overt raining perishes the very thought, and for good reason. Workouts tear down muscles. Rest and proper nutrition build them up. Without enough recuperation time, your body may stop growing; it may even start shrinking. As a rule, you certainly shouldn’t train your muscles without proper rest, but like other rules, this one can sometimes be broken.

Do quad workouts two days in a row or perform three sets of barbell curls at the end of every gym session for a week and your muscles will take note. Even more than other shock therapies, however, multiplying the workload without proper rest should be performed sparingly. Utilize relatively high reps, aiming for a good pump rather than strength plateaus, limit this technique to weak points when other surprise attacks are no longer surprising and be ever vigilant to make certain this form of shock therapy is helping spur muscle growth and not spurn it.

USE THE CORRECT GRIP AND STANCE

Most exercises have prescribed grips and/or stances that should be followed in order to properly target your muscles.

WHEN AND HOW TO BREAK IT Certainly, lifts like dumbbell flyes offer little opportunity to be safely altered, and some modern machines virtually eliminate deviations. However, other exercises offer myriad possibilities. For example, you can do chins to the front or back with your hands virtually anywhere along a bar. Likewise, pushdowns can be performed with a variety of handles for different effects; but, in addition to that and despite what many prescribe, you can occasionally stand farther from the weight stack. Try taking a few steps back while still keeping your elbows at your sides. This position will place an even greater emphasis on the lift’s contraction as you have to push the handle back as well as down.

Similar results can be attained with many exercises simply by deviating your grip and/or stance. There is a standard form for most lifts, and you would be well served to learn it, but you should never forget that subtle or great variations on the old standards can make subtle and sometimes great differences in your physique. Don’t get locked into doing exercises the same way over and over if, via a little experimentation, you can safely impart some much needed variety into your routines and find a methodology that better suits your physique.
FINALLY So there you have five scenarios in which it is OK — and indeed beneficial — to break the rules. However, the unbreakable rule about breaking rules is to do so only occasionally as shock therapy for complacent muscles. For the most part, keep following the basic bodybuilding philosophies, knowing that it pays to be a rebel once in a while.