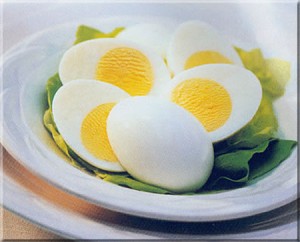 When you “get cracking” in the morning with an egg breakfast, you are likely to stave off hunger, therefore reducing your calorie intake by as much as 18 percent.

This, according to a study in the journal Nutrition Research.

21 male subjects, each ate two different test breakfasts. On one test day the participants ate an egg-based, protein-rich breakfast including three scrambled eggs and one-and-a-half pieces of white toast. On another test day they ate a bagel-based, carbohydrate-rich breakfast including one plain bagel, one half tablespoon of low-fat cream cheese and six ounces of low-fat yogurt. The two breakfasts contained identical calories.

The macronutrient breakdown was as follows:

This reinforces the satiating power of a higher protein meal. The study showing participants consuming 400 calories less, is consistent with a study from the American Journal of Clinical Nutrition (Weigel et. al), which showed a 441 calorie reduction on a moderately high protein diet.

Eggs are relatively low in calories (about 70), nutrient dense and inexpensive. They are certainly an ally in terms of weight control as part of an overall healthy diet.

Oh, and you can keep the yolks in!