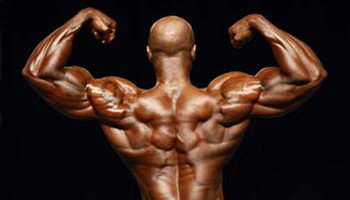 After New York City policeman Vaughan Ettienne placed fifth in the light-heavy class of last year’s NPC Nationals, we named him one of our four “Who’s Up” guys from that contest. Since then, he’s stayed up, for in his next contest, the recent NPC/IFBB Team Universe, he not only won the light-heavy class but the overall, securing the right to compete in the IFBB Pro League. His waist-to-shoulder differentia is among the best in the sport, so in the Gym Bag section of the June issue of FLEX we featured Ettienne’s unusual shoulder routine (delts and traps). In honor of his earning a pro card, we repeat it here and break down in greater detail what makes it so unique.

– Trap priority
He works shoulders twice every 10 days, and every other workout he prioritizes traps by doing three types of shrugs after overhead pressing.

– Machine wide-grip rows
He does what most people think of as a back exercise as part of his shoulder workout, keeping his elbows high and wide and using an overhand grip. In this way, he focuses it on his rear delts and inner traps.

– Seated dumbbell shrugs
He prefers to shrug while seated to take his legs and back out of the movement. 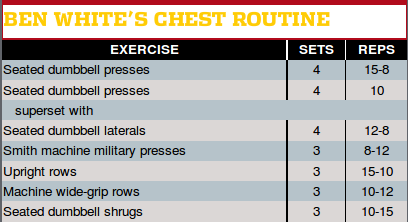