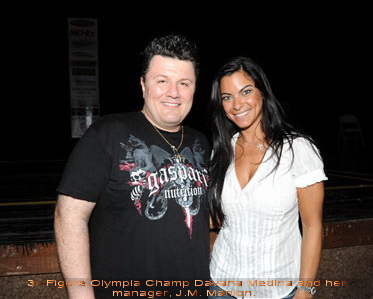 Missing the 2006 IFBB Figure Olympia, Medina retired from the sport and had a daughter named Davela with her husband. She was virtually missing from the NPC and IFBB scene for several years until she was spotted at a NPC show in late 2009. Recently on July 14, 2010 by her manager, FMG, was confirmed that Davana would be making a comeback to the competitive stage as a bikini competitor at the IFBB Europa Hartford Bikini Championships

FMG PRESS RELEASE
On July 14, 2010, at the 2010 NPC Team Universe Championships which took place in N.J.,  through audience, everybody took attention to the 3-time IFBB Figure Olympia champion Davana Medina, who was enjoying the competition. Those that saw her realized she wasn’t just there as a spectator, she was there to do some research. Everybody was curious to know if she is coming back to competition. Davana didn’t let on then but we are here to confirm the rumors that Davana Medina is returning to the IFBB & will be making her return competing in the 2010 IFBB Europa Show Of Champions Pro Bikini in Hartford on July 23rd & 24th. And she has re-signed with FMG who had the great pleasure of managing Davana Medina’s entire NPC & IFBB career starting in 2001 until her retirement. Davana is also the first former FMG athlete that we have re-signed to work with.

Former FMG athlete & another IFBB Figure pioneer Jaime Franklin reconnected Davana with us at the 2009 Arnold Fitness Weekend. Initially we thought she might return in Figure but after lengthy discussions with Davana the new IFBB Bikini division seemed to be the perfect fit of what she was looking to accomplish.

Next was getting Davana a trainer to help her get on stage in 2010 to qualify for the inaugural 2010 IFBB Bikini Olympia. That trainer turned out to be her old friend, FMG athlete & 4-time IFBB Fitness Olympia champion Adela Garcia.

Adela stated, “I am honored and excited to be working with Davana as we go way back. Davana is an extremely hard working athlete & when she puts her mind into a goal, she goes after it all the way. When I was told about Davana returning to compete I reached out to her & ever since Davana & I have been talking about her returning into competition. I knew she wanted to compete again & once I knew she was game, I told her “Girl, I am your girl & we are in it to Win it”. You have 2 Olympia Champions mentality & all you create is fire to Win. Davana will step on that Bikini Olympia stage ready and O.F.F. Challenge is ecstatic to have her on board. Thank you so much for the great opportunity to be part of your new journey Davana. Thank you FMG for trusting me to bring her ready to do some damage.”

Look out because Davana Medina is back to rock IFBB Bikini the way she did IFBB Figure in the last decade!