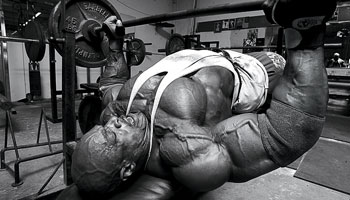 So you think you know everything about Ronnie Coleman’s training, huh?

Pop quiz, hot shot. Sharpen your No. 2 pencil, put aside your old issues of FLEX and journey with us to MetroFlex Gym in Arlington, Texas, to watch the legend train chest. The Coleman comprehension exam begins now.

1. True or false:Coleman built his physique with heavy weights for low reps.
FALSE. Coleman has long used prodigious weights, including such legendary lifts as an 800-pound squat (for one rep) and an 805-pound deadlift (for two reps), but these feats don’t reflect the manner in which he has regularly trained during his 15-year pro career.
Over the years, Coleman has almost always kept his reps in a moderate range of 10-12 per set. In the workout we witnessed – only two weeks before the 2006 Olympia – he did 365-pound bench presses for 10 reps and 315- pound incline presses for 12.
“I go for 10 reps per set,” he says. “Sometimes I might only get eight or nine, but I was going for 10. Missing 10 doesn’t happen very often, though – maybe just the last couple sets of a workout. If I can keep going at 10, I do, but if I get more than 12, the weight was too light, and I’ll use more next time.”

2. Which of the following is not featured in a typical Coleman chest workout?
(a) Smith machine
(b) Gloves
(c) Elbow wraps
(d) Spotter (and NPC competitor) Robert Lee
(e) Orbit sugar-free gum
(f) Extremely loud music
THE ANSWER IS (A), SMITH MACHINE.
Many champion bodybuilders utilize machines for chest and shoulder pressing, but not Coleman. He sticks to the free-weight basics in the offseason as well as precontest. “I don’t have anything against machines, I just like free weights better,” he says with a grin. Then he clarifies, “I like free weights better because they work better.”
As for the other items on the list, he always wears gloves when training, and he wraps his elbows before pressing lifts. Welterweight amateur Robert “The General” Lee spots him and helps load and unload weights. The MetroFlex sound system is eternally quaking with brain-jarring rap or heavy metal. And Coleman chews Orbit sugar-free gum throughout every workout, sometimes blowing bubbles between sets.

3. Which of the following does Coleman do in a typical chest workout?
(a) Flat-bench presses
(b) Incline bench presses
(c) Decline bench presses
(d) All of the above
IF YOU SAID (D), ALL OF THE ABOVE, YOU ARE CORRECT.
Whether he uses barbells (as in the workout we observed) or dumbbells, his chest-training sessions consist entirely of presses. In the past, he has done other exercises, such as flyes, but when I ask him why he doesn’t do them now, he answers succinctly with a laugh, “Because I don’t need to. If it ain’t broke, don’t fix it.” The eight-time Mr. O built his pecs primarily with free-weight presses, and there’s no arguing with the results.

4. True or false: When pressing, Coleman takes a relatively wide, thumbless grip and does not lock out.
TRUE. Coleman’s chest-pressing grip on a standard Olympic bar places four fingers per side on the outermost knurling, with only his thumbs crossing the smooth bands to the inside knurling. He doesn’t wrap his thumbs around the top of the bar – he keeps them on the underhand side. For safety reasons, we don’t recommend that you use a thumbless grip for heavy pressing, but Coleman has sufficient gripping strength and many years of experience, so there is little chance of his hands rolling forward and dropping the bar. There’s no advantage to a thumbless grip on presses; it’s simply more comfortable for him. Coleman brings the bar down to his chest or nearly to his chest for each rep, but he stops approximately three inches short of a full lockout at the top. This is done to keep the maximum tension on his pecs. The lockout of a chest press is accomplished primarily with triceps strength.

5. What two bodyparts does Coleman train in the same workout immediately after his chest?
TRICEPS AND CALVES. In the workout we watched, he did seated two-arm dumbbell triceps extensions, onearm underhand pushdowns with a D-handle and two-arm overhand pushdowns with an EZ bar. For each exercise, he did three sets of 10-12 reps. He finished with seated calf raises, calf presses on a 45-degree leg press machine and standing calf raises, again doing three sets for each exercise, sometimes getting a few more reps (up to 15 per set).

6. In 50 words or less, describe MetroFlex Gym.
As long as your answer conveys the fact that the Arlington gym, where guys like Coleman and Branch Warren go to work, is unabashedly hardcore, proudly old school and features an inviting community of people who want to train heavy with free weights and basic machines, you’ll capture the spirit of the place. If you confuse it at all with the typical big chain health club, with rows of chrome contraptions, cardio classes and a phalanx of personal trainers in matching shirts lecturing you on how to best “work your core” with balance boards and big plastic balls, you don’t know MetroFlex.

7. How often does Coleman do the chest routine included in this article?
ONCE PER WEEK. Coleman trains every major bodypart, including chest, twice per week. However, the two workouts are unique. In the chest session we watched, he did all of his presses with a barbell, while in the second weekly workout he does the same presses (flat, incline and decline) with dumbbells. He rarely changes his twice-weekly workouts for any bodypart.

8. True or false:Coleman pushes most of his sets to full-rep failure or beyond.
FALSE. Coleman trains hard, but he does not focus on reaching full-rep failure for each working set. In fact, he typically stops just before that ultimate point. What’s more, he rarely employs forced reps, partial reps, negatives, descending sets, rest-pause or any other technique for pushing a set beyond failure. Lee assisted on only one forced rep (during incline presses) in the workout we observed. Coleman also is not a regular user of supersets, pre-exhaustion or any other technique for increasing workout intensity. He does straight, progressively heavier sets for moderate reps with relatively long rest periods (two minutes or more) between sets. People often ask me how 43-year-old Coleman can train with such heavy weights without tearing every tendon. The secret is moderate reps at moderate intensity. He isn’t trying to push every set beyond his previous limits. Then, too, he may be the most genetically gifted bodybuilder to ever walk the face of the earth.

9. Which of the following is not a common Coleman workout exclamation?
(a) “Light weight!”
(b) “Ain’t nothin’ but a peanut!”
(c) “Get on up!”
(d) “Yeah, buddy!”
THE ANSWER IS (C). “Get on up!” was sung by the late James Brown in his classic song “Sex Machine.” Coleman occasionally shouts the other three exclamations before his heaviest sets

10. True or false: An intermediate bodybuilder could regularly perform the same workout as Coleman without overtraining.
TRUE. Coleman does only a moderate amount of workout volume, so, although it’s very unlikely you could use the same weights for the same reps of even his precontest workout, there’s no reason why you couldn’t do the same nine pressing sets for chest. In fact, we recommend that more advanced trainers add three sets of dumbbell flyes to the workout included here. Although you could perform his routine, we don’t suggest you train chest (or any major bodypart) twice per week. Coleman is the rare modern bodybuilder who follows such a twiceweekly split. It has certainly worked for him, but if most bodybuilders trained everything two times per week, they would either overtrain (by not allowing their muscles to rest enough between workouts) or undertrain (by doing lengthy, lower-intensity workouts). Allow at least five days to pass between workouts for a major bodypart such as chest. 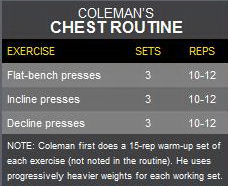 FINAL SCORE If you answered each question correctly, congratulations! You are a Colemaniac. If you missed more than three, review the answers for this chest test. There is much to be learned from Ronnie Coleman, the man whom the current Mr. Olympia, Jay Cutler, calls the greatest bodybuilder of all time. As this exam has explained, the average trainer shouldn’t follow all of Coleman’s routine practices. After all, there’s nothing average about his physique. The most important lesson to take from this exam is the same one that Cutler himself relearned in recent years: there’s no substitute for free-weight basics. Coleman’s chest routine is so basic that it’s positively primitive. He does only barbell and dumbbell presses, and he doesn’t combine the two in a given workout. This chest test is over, but there are many more in your future, and all of them will require barbells and dumbbells instead of pencil and paper. The tests will be progressively harder and you’ll only pass each one by progressively improving your performance. No cheating. When the going gets tough, just ask yourself, What would Ronnie do? Then shout, “Ain’t nothin’ but a peanut!” and lift a heavy weight like it’s light.