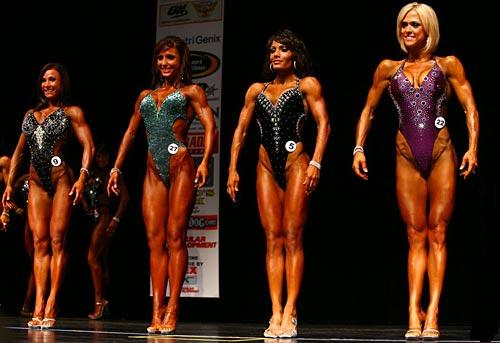 The ’10 IFBB New York Pro Figure (and NPC Team Universe and Fitness Nationals) got off to a big start last night in Hackensack, New Jersey. From the callouts and photos it appears that Cheryl Brown, a 38-year-old mother of three who’s had a sensational string of top-three finishes since turning pro last summer at the IFBB North American Championships, is on tap to score her second win. Also that Terri Turner and Gennifer Strobo could be nabbing the other two Olympia-qualifying spots. 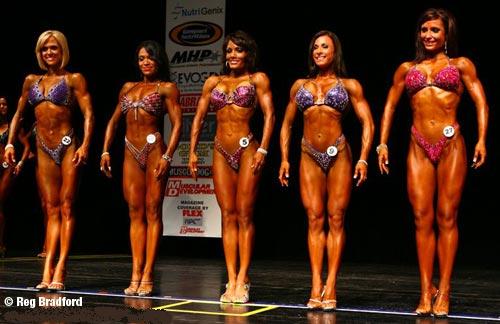 Those three, plus Dana Fallacara, a brand-new pro who took the A-class at the Junior Nationals last month, made the first callout in the one-piece suit round. I liked the look of Josie Zamora, the overall champ at the Juniors, and the judges must have too. When they got to the two-piece round, they added her to the previous group for the key first callout.

The accompanying photos are the first callouts from both rounds, courtesy of Reg Bradford. Check back later for more on the Team U and Fitness Nationals—and to see if I was right about Brownie, Terri and Gen.

Top photo (from left): Dana Fallacara, Terri Turner, Cheryl Brown and Gennifer Strobo. The panel retired Turner and Brown but kept Fallacara and Strobo up for the second comparison.

Second photo: Josie Zamora (second from the left) joined the group for the big two-piece comparison.