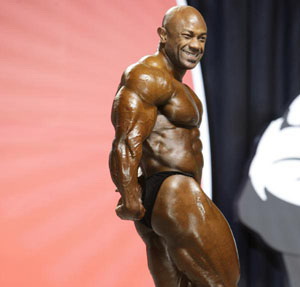 Spend a day with Rashid’Roc’ Shabazz and it starts to make sense. Not the dream of a short skinny kid from a small southern Mississippi town who thought he could become a professional bodybuilder, but how he made it come true despite a thousand reasons why it would never work.

Once you hear how he thinks and see how he lives, you can’t help but feel it too  Shabazz’s belief that if you want something to happen, you have to take full responsibility for the result, then work as long and hard as it takes to make it happen.

That’s why it made perfect sense for a 5’5″ 132-pound guy barely out of his teens to leave his family and hometown of Bay St. Louis behind in 1991 to go find the reigning Mr. Olympia, Lee Haney, so he could learn how to become a pro bodybuilder. In Mississippi, there were no professional bodybuilders, Shabazz says. All I knew was what I saw in the magazines, but I needed to see for myself. Lee Haney had been Mr. Olympia for years, and he was in Atlanta, Georgia, so I packed up everything I had and put it in my little truck  a 1988 Suzuki Samurai  and I moved.

Finding Haney in a city of three million people, then actually getting access to the reigning Mr. O, would seem impossible to most people, but, undaunted, Shabazz searched until he found him. When he actually stood face to face with Haney for the first time, at Haney’s world-famous Animal Kingdom Gym in downtown Atlanta, Shabazz didn’t miss a beat. He boldly yet politely asked Mr. Olympia for exactly what he wanted: You don’t have to pay me, just hire me so I can learn. I just wanna be in the gym. I really appreciate it  anything you can do.

Picture for a minute the scene: Shabazz, 132 pounds of balls and ribs, telling the 250-pound bodybuilding icon that he was there to learn how to become a pro bodybuilder and needed his help. You can only imagine the laughter that gutsy presentation must have sparked around the gym. But the young man walked away with the job he wanted at Animal Kingdom Gym. That’s where Shabazz and his newfound best friend and training partner, 5’9″ 155-pound Jonathan Rowe, started their quest for bodybuilding glory together.

AMATOOR NO MORE Rowe was actually the guy who helped Shabazz find Haney. The two met in a small gym in Atlanta just after Shabazz hit town  they caught a workout together and afterward talked about their dreams of being pro bodybuilders. Rowe, a local, pointed Shabazz in the direction of Animal Kingdom. After Shabazz got the job there, he hooked up 20-year-old Rowe with a job there, too, so they could learn and train together.

Now, 15 years later, both of them are IFBB pros and are still close friends and training partners. Reminiscing about those early days, Shabazz recalls another key meeting. When I got to Animal Kingdom, I saw the biggest man I had ever seen in my life, he says. Of course, Shabazz introduced himself, and walked away from the meeting with someone willing to help him. The next morning at 6 AM, Shabazz and Rowe started training with current IFBB pro (then an amateur) Stan Curly Top McCrary.

In 1993, Shabazz entered his first bodybuilding contest, the Mr. Atlanta, and won the lightweight class at 144 pounds (there was no bantamweight division). After the big win, Shabazz went to Haney’s home to show him pictures from the competition. I was in awe to see the Sandow, he says. We looked at the pictures, and Lee, with his southern drawl, called me an amatoor for how I was hitting my poses. He then taught me how to do them right.

In 1997, Shabazz appeared in his first NPC Nationals and finished out of the top 15. Undaunted, he vowed to compete in no other contest but the Nationals  the top show for amateurs in the NPC  until he earned his pro card. In 2001, he came in eighth as a middleweight; in 2002, fourth as a light heavyweight; and in 2003, he moved up to second in the light heavies.

Before Shabazz left for the 2004 Nationals in Dallas, Texas, he stopped by to see Haney  he wanted to touch a Sandow for luck. He told me, Go ahead, amatoor, don’t drop it, Shabazz says. That’s a great man. I came to Atlanta because of him and he didn’t disappoint me one bit. Shabazz, at 197 pounds, won the light-heavyweight title that year, and the long-coveted pro card was his.

SCHOOL OF ROC
These days, Shabazz has a penchant for routine and schedules. I need to have structure, he says. It’s how I keep straight.

Each day, it’s the same drill: his feet hit the floor at 5 AM and down goes breakfast. Next he preps himself for the groups of six to 10 clients he will be training that day. At 6:30 AM, he meets his first group for an hour session. Then it’s over to a nearby waffle house for steak, eggs and hash browns, and back to the gym for his next training session at 9 AM. This second group is made up of professional athletes who have played either in the NFL or NBA. A final group trains from 10 until 11 AM. After that, Shabazz heads home to eat and run over the day’s business with his personal rock his wife, Gina. He sleeps for one hour or one hour and five minutes we told you he was regimented  and heads off to the gym to work out. After the gym, he goes home for family time, and hits the sack at 10 to rest up for the start of the same routine the next morning.

TRIING HARDER To observe Shabazz in the gym is to see the stark reality of how much hard work it takes to go from a 132-pound bag of bones to a 220-pound professional bodybuilder. On this day, I catch his Saturday routine, an arm workout, with 225-pound 2005 NPC National heavyweight champ Rowe. Shabazz hits a dumbbell rack first. To warm up my triceps, I warm up my biceps, he explains. Triceps training is extremely heavy, much heavier than biceps work. When I’m doing biceps, I usually start sweating a little bit; that warms me up for tris. Fair enough  but the warm-up could just about cause a meltdown. It’s a set of standing dumbbell curls consisting of 40 pounds for 20 reps, 35 pounds for 30 reps, 30 pounds for 40 reps and 25 pounds for 50 reps. That’s all one set  no rest. That gets me going, Shabazz proclaims like it’s nothing. He’s just getting started.

Shabazz moves on to V-bar cable pushdowns. He starts with eight reps at 100 pounds, and over six sets he works his way up to 150 pounds for six. Shabazz and Rowe methodically trade off, each taking a breather while the other performs his set. You can see the pain on their faces, the blood filling their tris to their breaking points, but through it all, neither gives any indication of fatigue or defeat. It’s as if the challenge brings them to life.

After six sets of pushdowns, the Roc-and-Rowe show shifts to triceps kickbacks. Shabazz starts with a 20-pound dumbbell and adds weight each set until he has a 60-pound dumbbell for the fourth and final set of six reps.

Inhaling and exhaling hard, with the heavy toll of training to complete failure multiple times carved into their arms, Shabazz and Rowe help each other position two flat benches near a stack of heavy iron for weighted bench dips. Shabazz starts off with a set of 50 reps with no weight; for the second set, he adds one 45-pound plate to his lap and bangs out 40 reps. The third set is two plates for 30 reps, and for the last set, with 180 pounds of iron precariously stacked on his lap, he reps out 20. One-arm reverse-grip cable extensions round out the triceps portion of the workout. Shabazz does four sets of the finishing exercise, starting with eight reps and pyramiding the weight upward until he reaches the maximum he can handle for six solid reps, going to total failure each set.

This workout was one of their refining workouts for triceps. In other workouts, they include mass movements like lying triceps extensions and one-arm dumbbell extensions. As the two veteran warriors sit in repose, quietly talking about this and that, it becomes unfathomable that on Monday they will show up and do it all again for another bodypart. Then the same on Tuesday and Wednesday . . . in fact, six days a week. It has been that way for the past 15 years, without a break of more than a couple of days at any one time.

This is how Shabazz and Rowe started and how they have lived their lives together in the gym since, making their dreams come true. The fact that they’ve made it even this far is unfathomable, thinking back to those thousand reasons why a kid from Bay St. Louis couldn’t join forces with a kid from Atlanta to rise in 15 years from bodybuilding newbies to the bodybuilding elite. Someone must have forgotten to tell them  but then again, neither one of them would have believed they couldn’t do it, anyway.