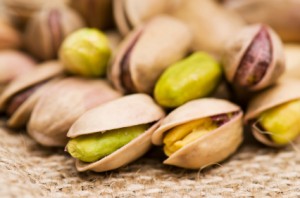 (NaturalNews) Making pistachios a regular part of your diet could reduce your risk of cancer, according to a study conducted by researchers from the University of Texas and Texas Women’ University, and presented at the American Association for Cancer Research’s Frontiers in Cancer Prevention Research Conference in Houston.

Pistachios are known to be high in a form of vitamin E known as gamma-tocopherol, which has been linked to a lower risk of some cancers.

“It is known that vitamin E provides a degree of protection against certain forms of cancer. Higher intakes of gamma-tocopherol … may reduce the risk of lung cancer,” researcher Ladia M. Hernandez said.

The researchers noted that like all nuts, pistachios are high in fat. However, they can be very healthy in reasonable quantities.

“Pistachios are one of those ‘good-for-you’ nuts, and two ounces per day could be incorporated into dietary strategies designed to reduce the risk of lung cancer without significant changes in body mass index,” Hernandez said. “Other food sources that are a rich source of gamma-tocopherol include nuts such as peanuts, pecans, walnuts, soybean, and corn oils.”

Nuts such as pistachios are also high in antioxidants, which can help lower cholesterol and stave off chronic diseases including cardiovascular disease and dementia, in addition to cancer. The fats from nuts are believed to be much healthier than those from animal products, and have been proffered as an explanation for why the “Mediterranean diet” appears to reduce the risk of heart disease even though it is relatively high in fats from olive oil, nuts and moderate amounts of dairy.