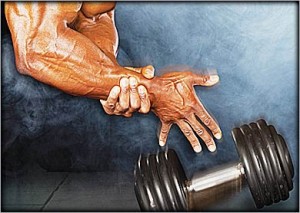 The popularity of weight training has grown over the past decade. A new study conducted by the Center for Injury Research and Policy of The Research Institute at Nationwide Children’s Hospital has found that the number of injuries from weight training has increased as well. The study found that more than 970,000 weight training-related injuries were treated in U.S. hospital emergency departments between 1990 and 2007, increasing nearly 50 percent during the 18-year study period.

Data from the study, available online as a Preview Publication-Before-Print in the American Journal of Sports Medicine, showed that males (82 percent) and youths aged 13 to 24 years (47 percent) sustained the largest proportion of weight training-related injuries. The majority of injuries occurred during the use of free weights (90 percent), and the most common mechanism of injury were weights dropping on a person (65 percent). Injuries to the upper (25 percent) and lower trunk (20 percent) were the most common followed by injuries to the hand (19 percent). The most frequent injury diagnoses were sprains and strains (46 percent) followed by soft tissue injuries (18 percent).

While youths (ages 13-24) had the highest number of injuries, the largest increase in the incidence of injuries occurred among those aged 45 years and older. People aged 55 and older were more likely than their younger counterparts to be injured while using weight-training machines, and to sustain injuries from overexertion and lifting or pulling. On the other hand, youths 12 years and younger were more likely to be injured while using free weights. This age group had a higher proportion of lacerations and fractures, and were more likely to sustain injuries as a result of having a weight drop or fall on them than those aged 13 years and older.

“Before beginning a weight training program, it is important that people of all ages consult with a health professional, such as a doctor or athletic trainer, to create a safe training program based on their age and capabilities,” said study author Dawn Comstock, PhD, principal investigator in the Center for Injury Research and Policy at Nationwide Children’s Hospital. “Getting proper instruction on how to use weight lifting equipment and the proper technique for lifts, as well as providing trained supervision for youths engaging in weight training, will also reduce the risk of injury.”

The study also found that while males had the highest number of injuries, there was a larger increase in the incidence of injury among female participants.

“Weight training may still be a male dominated activity,” said Dr. Comstock, also a faculty member of The Ohio State University College of Medicine. “However, the increase in incidence among female participants is likely the result of more women weight training as it becomes a more accepted fitness activity for women.”

“The Arnold Sports Festival commends the Center for Injury Research and Policy at Nationwide Children’s Hospital for taking a close look at injuries related to weight training and weightlifting,” said Jim Lorimer, co-promoter of the Arnold Sports Festival, the largest multi-sport festival in the nation with more than 18,000 athletes competing in 44 sports and events. “We want all of our athletes to train and compete in a safe environment, and it is invaluable that Nationwide Children’s works to raise awareness in these important areas.”

The 2010 Arnold Sports Festival was held in March in Columbus, and attracted more than 175,000 sports and fitness enthusiasts. Nationwide Children’s and the Arnold Sports Festival have a five-year partnership initiated this year that names the hospital as both a philanthropic beneficiary and official youth sports health partner for the Festival.

This is the first published analysis of the epidemiology of injuries directly related to weight training across all age groups of the general population treated in U.S. emergency departments during the last two decades. Data for this study were collected from the National Electronic Injury Surveillance System (NEISS), which is operated by the U.S. Consumer Product Safety Commission. The NEISS dataset provides information on consumer product-related and sports and recreation-related injuries treated in hospital emergency departments across the country.