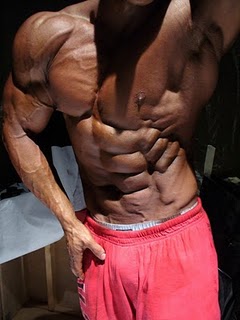 Speaking differently, your body will burn excess fat in order to replenish missing energy when you consume limited amount of carbs. This process is known as ketosis – appearance of ketone bodies (natural by-products of fat metabolism) in our organism. Presence of ketone cells in the organism is especially useful for bodybuilders because they can be used as an energy source and due to this they assist muscle mass maintenance. In addition to all that has been said above, ketones suppress our appetite.

Why does reduction of the quantity of carbs eaten with food appear to be the most effective method of fat burning?

Everybody knows that carbs (sugars) are the main and most effective energy source of our organism. They are easily assimilated and transformed into glucose that circulates in our blood vessel system and into glycogen that is stored in our liver and muscles for further use. Capability of these natural ‘tanks’ to accumulate glycogen is rather limited: when received carbohydrates either cannot be stored (in case of exceeding of their daily norm) in the form of glycogen or it’s simply not enough time for this (in case of consumption of high-glycemic easily-assimilated sugars) glucose blood level immediately increases. This stimulates secretion of hormone insulin by the pancreas. Insulin, in its turn, stimulates lipogenesis assisting transformation of consumed carbohydrates into fats. When the amount of carbohydrates in our diet is limited it’s very important to stabilize sugar blood level: in case of high glucose blood level lipolysis doesn’t occur and it means that hypodermal fat is not used for energy purposes.

One of main disadvantages of a low carb diet is significant muscle mass loss (it’s especially obvious if you receive not enough energy together with proteins or exclude carbohydrates from your ration completely).

Low carb diet can be considered not so much a diet as a certain nutrition style. It imposes strict restrictions only in the very beginning. In order to avoid excess fat you’ll have to stick to this diet for the rest of your life. But I need to underline it once again: this way to lose weight is very gentle and sparing.

Positive side of a low carb diet lies in the fact that it works almost with everyone. The idea is that when reducing the amount of carbohydrates we are able to control activity of such important hormone as insulin. Insulin slows down and even prevents fat burning. In the result of intake of a sufficient portion of carbohydrates sugar blood level increases to a great extent; in order to decrease it the pancreas produces an additional portion of insulin. Unfortunately lots of people possess so-called ‘insulin imperceptibility’: their organisms produce too much insulin that immediately ‘drags’ consumed carbohydrates into fat cells where they are transformed into fat. Thus, limitation of carb consumption for these people assists more effective fat burning.

If you decide to tray a low carb diet you’ll definitely need to know how to organise it. Well, there are three simple rules:

Gradually reduce the amount of carbs in your ration. Exclude from your ration the following products: white bread, rice, macaroni, potatoes, ice-cream, cakes and even the majority of fruits.

Increase the consumption of complex carbohydrates up to the usual level once each 5-6 days. It will help you fight metabolism rate slowing down that occurs by all diets.

How much protein do you require?

The average amount is 2-3 gr. per pound of lean body mass. Let’s take the following example: an athlete weighs 100kg and his fat level is 20%. In this case his lean body mass amounts 170 lbs and his daily protein need varies between 240 and 400gr. At the same time, consumption of carbohydrates should remain at the level of  0,5 gr of carbohydrates per pound of lean body mass (85gr in our example). These carbs should be complex ones (I prefer rice). Further reduction of carbs consumption is both difficult and unsafe.