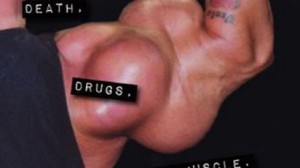 Love him or hate him, Gregg Valentino sure has made a name for himself in the bodybuilding industry. There are a class of folks who have made it no secret that they dislike the native New Yorker and that he gives the sport a bad name, but these are the people that know nothing about Valentino other than what they have read on the various Internet forums.

His “Ramblin’ Freak” column in Muscular Development magazine only gives the reader a taste of what Valentino is really like, but behind that persona lives a man who differs greatly from the facade seen every month. Behind the tree trunk-size arms and funny jokes lives a very intelligent man who appreciates every day he has after what he went through. And make no mistake about it, Valentino does not try to pass the buck. He freely admits that there is no one to blame for his troubles than himself and put his private life out in the open in his new book, “Death, Drugs and Muscle” (2010, ECW Press).

The reader is brought into a world that included drug dealing, but not the ‘common’ type. Valentino – once a very promising natural bodybuilder – began selling anabolic steroids to put food on the table for his wife and young son. After a while, he began using large amounts of the drugs. He was leading a double life – father and husband during the day and the big dealer at night.

His worlds collided and he eventually went through a divorce, leaving behind not only his wife but also a son and daughter. More troubles followed and it almost sounds ridiculous to say that having loaded guns put to his head on multiple occasions were the least of them. Valentino lost not only his mother but also his beloved girlfriend and found himself sitting in a jail cell wearing an orange jumpsuit.

As all of this was going on, the heaviest weight on Valentino’s shoulders was that he had let down his father, a man who he respects more than anyone and still lives with to this day. His parents raised him the proper way and Valentino stresses that they had absolutely nothing to do with his straying.

After being released from prison, Valentino turned his life around and has successfully picked up the pieces that were once his shattered dreams. The one thing that he has been unable to fix is the relationship with his son, who is now a young man. Valentino cannot say enough apologies to him, but it has not brought him back.

Learning what makes Valentino tick is quite an interesting and amusing ride, and he did include some favorite stories at the end of the book that his fans will rejoice in hearing again, but this time in full detail. Even in a serious platform, Valentino’s sende of humor never wavers and that is one of his special qualities.

By Joe Pietaro
for MuscleSport Mag