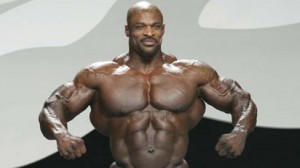 As heard first on today’s episode of MuscleSport Radio, Ronnie Coleman will make his comeback at the 2010 Mr. Olympia. The eight-time Sandow winner said in a live interview that he just made up his mind “a few days ago.”

Coleman originally intended on competing in this year’s Olympia but his travel commitments with BSN proved to be too much and would have affected his preparation.

The back injury that caused him to finish in fourth place at the 2007 Mr. Olympia and subsequent surgery  that made him sit out 2008 is 100 percent and was not a factor in Coleman putting off his comeback by a year. Coleman feels that the time off will be an advantage for him, as far as the back recuperation and not putting his body through contest prep for the past few years.

Coleman made a recent guest posing appearance at the Atlantic States in New York City and stated that he weighed under 300 pounds that night. During his active career, he said that he would go as high as 320 in the offseason and cut down to approximately 295 on stage.

Tied with Lee Haney for the most Olympia wins, Coleman still has that fire and desire to go out there and will make history with his ninth Olympia victory.

When ‘The King’ walks on the stage next year in Las Vegas, it will be the biggest comeback in bodybuilding history since Arnold Schwarzenegger returned in 1980 after five years away from competing.

By Joe Pietaro
for MuscleSport Mag