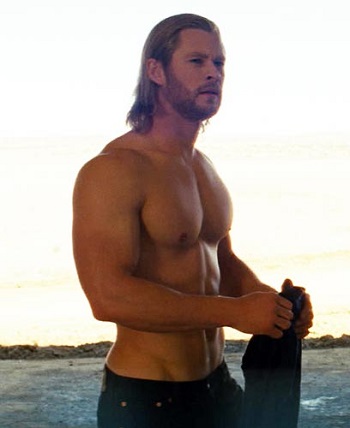 Another mighty Marvel character that we are going to talk about is Thor, the Asgardian God that has been played by famous actor Chris Hemsworth which is very well known to have a body that many gym rats envy. With such a good looking body, it is obvious that there’s a lot of speculation online about whether or not did Chris Hemsworth used steroids in order to achieve that body and be able to play Thor.

So, tell us in the comments what do you think? Did Chris used steroids for bulking up in order to get his role of Thor? In the general consensus the answer is “yes” and generally, there’s just one reason for this: “he must be on steroids and that’s because he is really jacked up”. But as much as we can notice, such an opinion lacks credibility and in has no weight as a fact. That’s why, we are not going to take in consideration such a reason of why he’s “on steroids” but we are going to try to answer the question whether is he on steroids or not following real facts.

I guess there’s no need to mention that this is mostly because only looking at how big somebody is and is saying that they need to be on steroids is really naïve. The building of the muscles is coming down a lot to a person generics which is super individual to a lot of people and there are other factors except for genetics (which is indeed very important because everybody is having different limits for building muscles and getting size).

Well, ok, let me give you an example: there might be a guy who has been lifting weights for like 20 years and yet, he still might be dwarfed by a genetically gifted 14 years old boy that hasn’t even finished to fully go through his puberty so far. Don’t get me wrong, I already mentioned this earlier – working hard is extremely important, nonetheless, we should not forget that bodybuilding is such a sport where the success is very much determined by genetics, much more than hard work. Of course, you can’t achieve great results without working out, but you definitely won’t be among the best without genetics. What I want to say is that working out a lot and eating clen is only going to get you to a point where others may reach it easily thanks to their generics. All in all, the hard work is going to allow you to fulfill the generic potential that you have which can be expanded exclusively only with the help of steroids and they still won’t help you as much as simple strong generic. Steroidal guys or non steroidal guys definitely won’t turn weak genetics into any exceptional genetics.

Anyway, we decided to check Chris Hemsworth for steroidal use today and that’s what we are going to do. Is he a natural guy or he has been juicing for the role of Asgard God – Thor? By analyzing all the information I could, here’s what I could get:

What was Chris Hemsworth Before Thor? 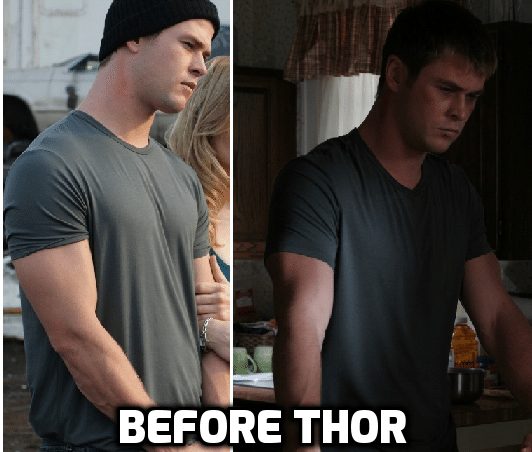 In order to detect if someone is using steroids you need to look at their body composition over a period of several years as I think that this is the best possible way to determine if the person uses steroids or not.

As a matter of fact, those guys that are staying natural are going to build up a significant amount of muscles when they firstly start to lift weights and as much as we know, the “newbie gains” are going to come in the time of a few months. The problem is that from that point on, they are going to see stoppage in their size gaining as they are going to stay the same size.

So, if there is a guy that has been lifting weights for several years and is reaching this moment when they stay the same size and then… out of a sudden is blowing up and is getting huge (much bigger than they were in the past), it is an obvious fact that they are taking steroids to reach that size. With all of that being said, we should take a look at what Chris has been looking like in Ca$h, which is the last movie that Chris starred before Thor. Ca$h appeared in 2010 which means the time difference between the movie Ca$h and Thor is only one year. That’s what we have done and the photo you can see above is from movie Ca$h.

As much as we can see in that photo, Chris was already looking pretty muscular and generally very good looking, nonetheless, he definitely doesn’t look as muscular as he looks like in movie Thor which appeared a year later. We can’t be sure but IN CASE Chris Hemsworth had already been lifting weights during the filming of movie Ca$h, then there’s almost a sure fact that he has been used steroids in order to pack that much size/ muscle mass for movie Thor. The reason for that is because to gain around 20 lbs of muscles for a veteran (non newbie) it is something that we haven’t heard about. This can be reached only by using steroids. With this being said, we started to have the following question:

By starting to do research whether or not Chris had ever been lifting weights we managed to find out that in an interview with Men’s Health – the actor Chris Hemsworth claimed the following:

“It wasn’t until Thor that I started lifting weights. It was all pretty new to me”

Not sure if he said the truth but if that’s indeed so, then that shocked me great time! That’s because it seems that Chris Hemsworth has already been jacked up before he ever has been working out in a gym. If that’s true, it does seems like he had God Like genetics because I think many would agree with me – by far not all guys can look the way Chris Hemsworth did before Thor without going to gym.

All in all, it does makes sense to me that his gains from the movie Ca$h to the movie Thor are all natural due to the fact that he has only gained 20 lbs (9 kg) of muscle mass, even though the time difference between Ca$h and Thor is only a year. It makes sense to me because there are some sources I am going to post earlier with experts words which explain that:

I can also share a comparison photo of Chris Hemsworth with a difference of 4 years. There’s a difference of what he looked like in movie Home and Away (2007) and Thor (2011). 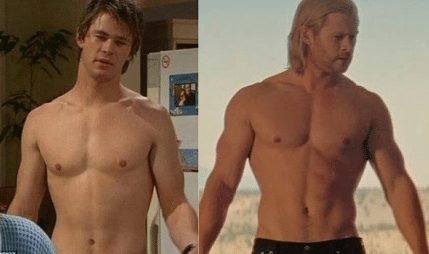 As much as we can see in the photos above, Chris didn’t actually doubled in size in this time of 4 years. It is obvious that he did gained a lot of muscles while staying lean, however as much as we can notice in the photos, that’s all far away from a typical steroid transformation. Don’t get me wrong, you need to analyze a lot of photos of Chris before and after before making a conclusion as I did have seen many before and after pictures online of Chris which are trying to make it look like he has gained roughly 100 lbs of pure muscles making it look like 90% of he’s on steroids. nonetheless, those before and after pics aren’t on scale as he is in different positions and are creating an illusion of him gaining that much. But the photo above is one of the best before and after photos out there because they are on a scale, with Chris being in pretty much the same front and is in a relaxed position in both photos. We can see there that he hasn’t gained THAT much.

In addition to that, there’s Bobby Hanton’s words that is another evidence (except for Chris’ own words) that the mighty Asgard God player might be all natural – he is a close friend and a stunt double. Here’s what he said:

As much as we can see, Chris and his friend both indicate that he achieved such great results without using any steroids.

So, is Chris Hemsworth on Steroids?

I have to be frank here – before I have done many hours of research before writing this article I was thinking that Chris Hemsworth is actually taking steroids, but that’s because of the reason I mentioned earlier – he is big hence he must be juicing, but as much as we can see – that’s not true. There are still chances that he uses something, but there are no obvious signs that we might take as evidence so we I think that Chris is actually natural.

As a matter of fact, Chris did got really BIG, nonetheless, by saying BIG I am trying to say that he’s big even by a natural bodybuilder’s standards. Nonetheless, Chris has played as Thor in 2011 for the first time but there are more recent movies as Thor in Marvel universe in the Avengers movies and yet, he doesn’t seem to get any bigger. With this being said, it is clear now that all of his transformation was thanks to the newbie gains and that’s because before he has ever played Thor, Chris has been an absolute bodybuilding and lifting weights stranger because his own words and his friends’ words are confirming this. Yes, he did was already jacked up, but it seems that this is all thanks to his indeed God Like genetics. 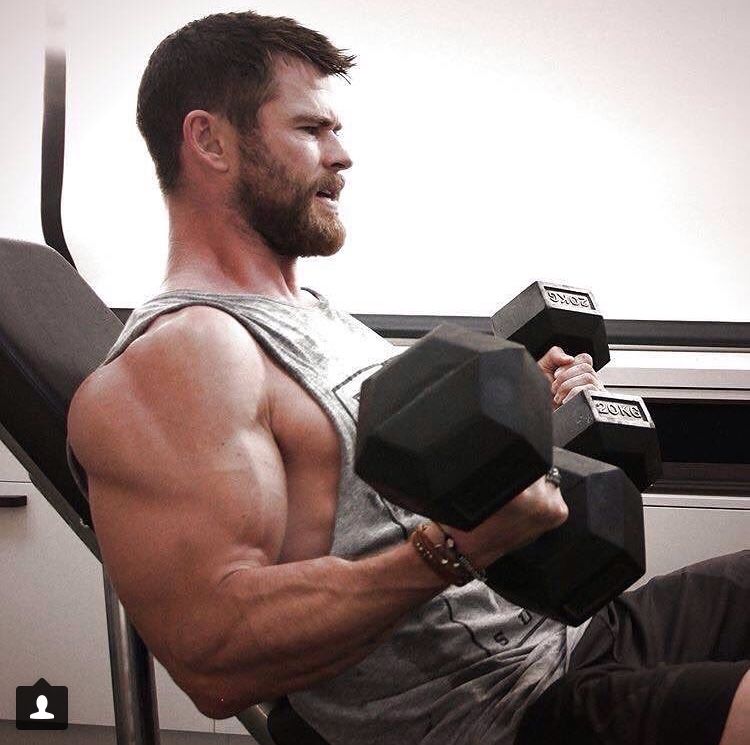 In addition to that, there are other factors which indicate that he’s all natural – if he would have used steroids then he wouldn’t have gained around 20 lbs of muscles as he would have gained much more, anywhere between 30 to like 50 lbs and plus to that, he would get even more swole and he would have had at least some of the steroid like symptoms, be he doesn’t.

As much as we can notice, Chris Hemsworth has been simply destined to play the Thunder God – Thor and that’s because he looks the way the comic character looks like and he achieved it without using steroids. It all sounds logical because in the Marvel universe Chris is a god but in reality, he does seem to have the genetics of a god. He was big before working out and he got even bigger after working out.

If Chris has ever used steroids or if he did uses them now, there are no evidences of this and that’s why we can’t say that he did used any steroids. I would recommend people watching Chris’ roleplaying as Thor – but who haven’t watched Avengers?

Thanks to the following sources: