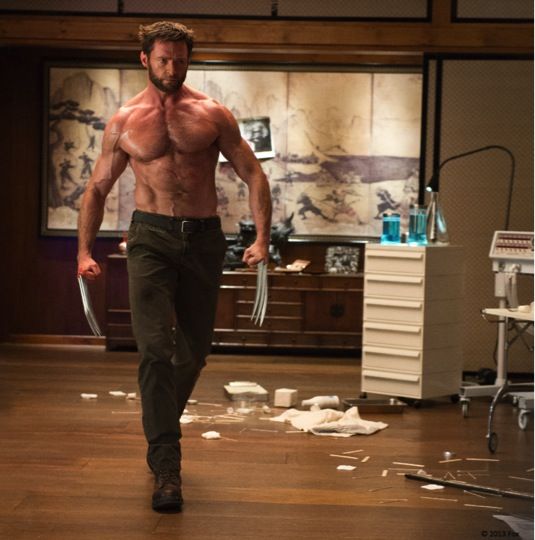 Hugh Jackman firstly appeared as Wolverine in the X Men movie in 2000 where the actor already had a really good shape and yet, there was something that was missing, or something wasn’t quite the way it should be. It is the fact that the actor, back in those days, wasn’t as muscular as the Wolverine is in the comic book. Hugh Jackman wasn’t looking bad, don’t get me wrong, he did looked like a muscular guy who worked out regularly, however he didn’t look anything more than that as he should have looked like an invincible mutant that they try to portrait in the movie.

Wolverine is portrait as one of the most powerful mutant who cannot die by bullets, who can tear steal and do things that humans only can dream of.

3 years later, Hugh Jackman played Wolverine again in X2 – X Men United where we can see him more muscular but we cannot say that there are huge differences in his physique between the first and second movie.

3 more years later in 2006 Hugh has played the next Wolverine movie in X Men: The Last Stand and in this movie we cannot see any differences at all compared to the way he look in the previous Wolverine movie appearance. 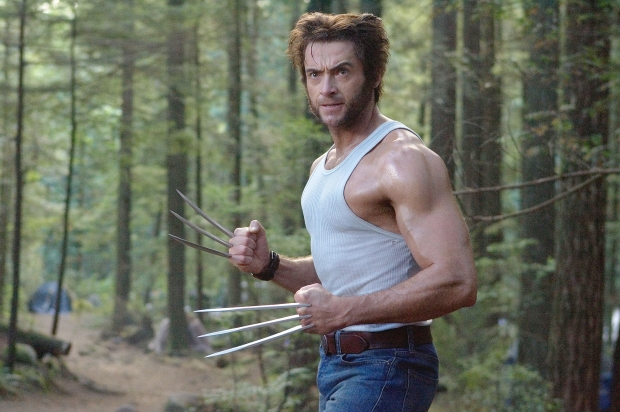 However, in 2009 (as much as we can see, Hugh Jackman appears as Wolverine every 3 years) the release of X Men Origins appeared and here we can see quite a big difference between Hugh Jackman’s physiques. For X Men Origins Hugh got really ripped to shreds. 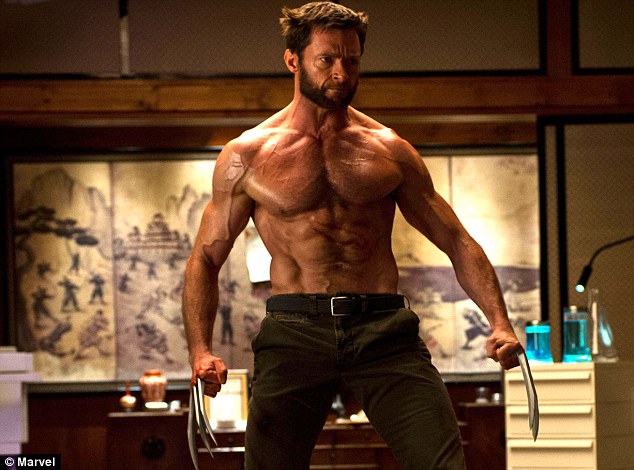 After that, appeared a whole movie dedicated only to this character named The Wolverine in 2013 and one year later X Men: Days of Future Past appeared where the actor got even more ripped compared to the previous movies. 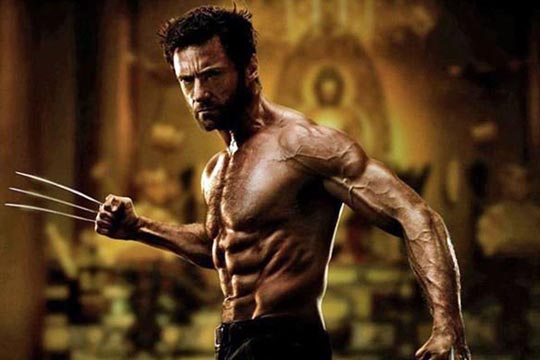 It is well known that steroids are widely used, especially among Hollywood stars and that’s why fans started to wonder if Hugh Jackman has ever used steroids for Wolverine movie since he had such a huge transformation, or he achieved such great results naturally.

Did Hugh Jackman Use Steroids?

Although we can see a big difference between the first Wolverine appearance in X Men (2000) and X Men: Days of Future Past (2014) – we can notice that Hugh haven’t actually gained a really big amount of muscles. 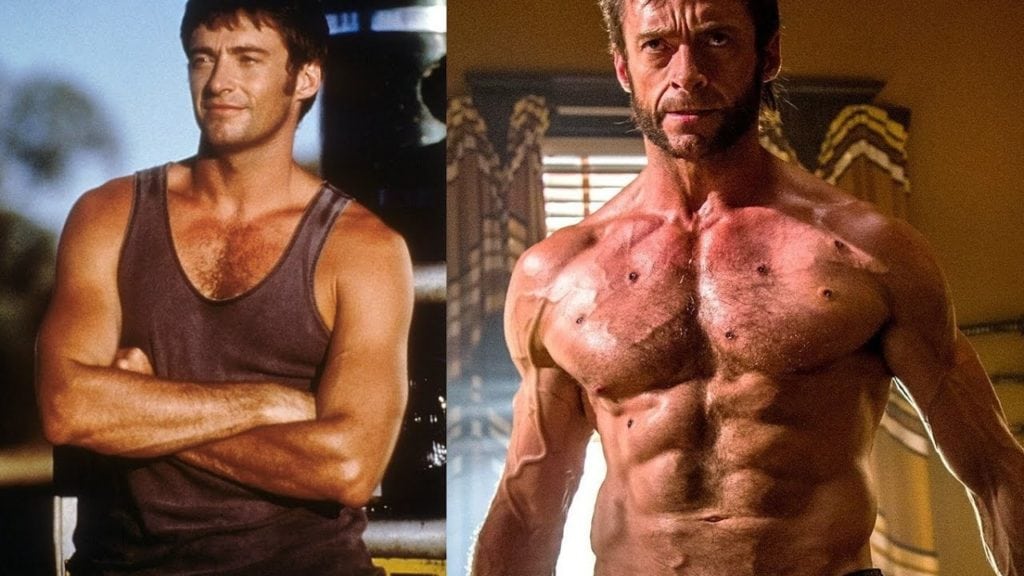 As much as we can see, Hugh Jackman hasn’t gained much or any amount of muscles in all these 14 years and yet we can see a difference. Plus to that, I did have noticed a lot of before and after photos of Hugh Jackman in many different poses which make him look like he has gained a lot of muscle mass, but doing a bit of more research you can notice that he actually hasn’t gained too much (or any).

But if we compare many different pictures of Hugh Jackman transformation, we can notice that he barely gained any muscle mass, the only and biggest difference is the fact that his body fat percentage has been dropped down to around 4% where he went from lean to shredded. Nonetheless, this definitely doesn’t mean that Hugh has used steroids for achieving it. Losing 4 % of body fat definitely doesn’t require using steroids and it also doesn’t require 14 years to achieve it. However, not requiring taking steroids doesn’t guarantee that Jackman didn’t actually used them. I am going to take a closer look in more details and determine if he has any physical signs of using steroids.

One thing that we can notice is the fact that Hugh has excessive vascularity as he has got much more veiny compared to what he looked like in the first photo. That is being mentioned here because usually, a steroid user will experience excessive vascularity because of the thinning of the skin and the increased production of the red blood cell production. Again, a natural guy also can get this effect, but usually, that’s an very common effect of using steroids. But one thing to take in consideration is the fact that he has got this veiny effect during a period of 14 years. If he would have got this excessive vascularity effect in a short period of time then this would have looked really strange and a giveaway sign of juicing.

Nonetheless, the actor got this effect during a long period of time (again, 14 years) and plus to that, the actor got older too. We are going older and as we age, the collagen levels are decreasing, naturally. As a result of decreased collagen, it results in a thinner skin and when there’s a thinner skin that is covering our veins, it is obvious that the veins are much more pronounced and hence the veiny effect. With this being said, in case you somehow manage to keep your body fat percentage more or less the same in 14 years (because it is pretty hard with time), then during this period you’re going to notice that you are going to be much more vascular compared to the way you’re looking like right now.

If you want me to prove it – just take a look at an old gym rat who has been lifting weights and is lean. As much as you can see, his veins are spiraling everywhere on his body and that’s not a sign that he has 100% taken steroids. Lifting weights while being old and lean would have as a result the veiny look. In fact, it is all so veiny to the point that you would nearly re think again if you want to be so vascular. As a matter of fact you need to remember: the higher your body fat percentage is, the less vascular you are going to be. That’s because body fat means a thicker skin and a thicker skin is covering the veins better.

All in all, remember that Hugh Jackman has been 46 years old during his Wolverine appearance for X Men: Days of Future Past and plus to that, he has lost a pretty good amount of fat while he has been preparing for this movie. And also, if you’re going to manage to reach your body fat to around 6% or maybe even less then you are going to naturally achieve much more vascular muscles, especially at that age.

As a result, I would say that Hugh’s increase in the vascularity it is thanks to his ageing and to the lower body fat in preparation for the movie, rather than using steroids.

Has he got Flushed Skin?

In the movie X Men: Days of Future Past (2014) Hugh Jackman has been noticed to have an extremely flushed skin. Having a flushed red color of the skin is the result of a high body temperature.

It is obvious that natural guys can sometimes develop a slightly pink appearance for a short period of time, that’s only when their blood pressure is spiked up which usually happens when working out or when they are in a sauna. 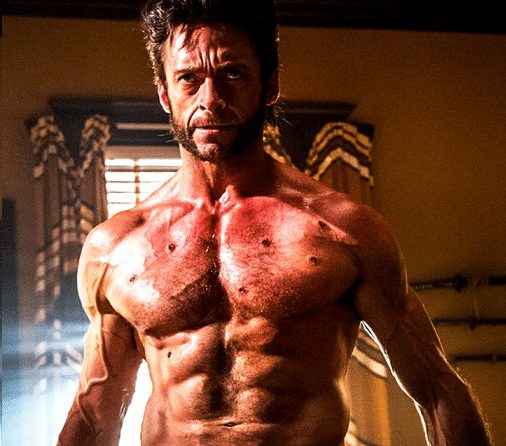 However, in the photo of Hugh Jackman that you can see above, his neck and his chest isn’t having a pink color of the skin, they are extremely red and that’s not usually a sign of natural guys as it is indicating a strong thermogenic activity that’s going on in his body and usually, such a strong activity is thanks to some substance intake.

Other evidences of using steroids

We have tried hard to find any other evidences of using steroids on Hugh Jackman’s body while analyzing many photos and videos of him and yet, we couldn’t manage to find anything else other than veiny look (which is mostly thanks to his age and low body fat percentage, as much as we can think) and red skin.

With this being said, other than Hugh’s veiny look and red skin, there are no other signs of using steroids.

In the end, based on the evidence that we managed to find, it does seem that Hugh Jackman has used PED’s (Performance Enhancing Drugs).

It does looks as if Hugh Jackman never used steroids as seemingly, he used clenbuterol only and this product is not officially classified as a steroid. I also must say that even though it does seem that Hugh may have taken clenbuterol (that’s not a fact) in order to help him get ripped (lose fat) for the X Men: Days of Future Past (2014) (which is a great movie, by the way), his physiques it is still a fully realistic goal in order to achieve it naturally, and that’s even for a guy that is having average genetics, but obviously – with a great dedication, workout and dieting plan.

Clenbuterol is the only thing that Hugh Jackman seemed to have used as he doesn’t appear to have ever used any bulking steroids due to the fact that he has never gained any significant muscle mass, especially in a short period of time. In case Hugh had ever taken a bulking compound such as testosterone then he would have ended up having a lot much more size (with bulking compounds, he definitely would have reached the size of Wolverine from the comics which is super ripped and super big).

In the Wolverine comics, the character is approximately 40 lbs heavier than what Hugh was at his best, nonetheless, if he would have reached this size there definitely would be much more speculation about whether or not Hugh has ever taken steroids. In the end, it doesn’t really matter if Hugh has ever used steroids or if he would have taken them for getting 40 lbs heavier in muscle mass. Hugh Jackman has still got an incredibly good shape that by far not everyone could achieve. This actor has played the Wolverine character the greatest possible way and thanks to his great acting, I doubt we can imagine anyone else as our beloved Wolverine.