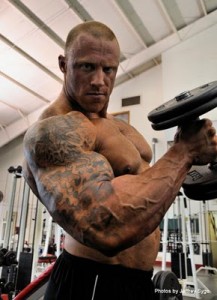 There are a lot of debates about necessity of reaching muscle ‘failure’. This is quite a new technique; lots of athletes trained without it and achieved sufficient results. Before we decide whether we need it, let’s first find out what is  it.

Failure is recognised as such muscle fatigue gained during the last set repetition when you are unable to overcome the weight with correct movement biomechanics.

There are three types of Muscle Failure: positive, negative and static.

Positive Muscle Failure arises when you are unable to lift the weight without outside assistance: for example, when performing Bench Presses you cannot lift the barbell to the required upper point.

Negative Muscle Failure arises when you are tired to such extent that you are unable to control even the process of weight lowering; the barbell is ‘pressing’ you. This failure type is also often called an ‘absolute’ one because further work with the weight is absolutely not possible in any sense.

Static Muscle Failure lies somewhere between positive and negative ones. This is the situation when you cannot hold the barbell motionless and it starts ‘pressing’ you.

All kinds of ‘failure’ arise gradually depending on an exercise phase. The first to appear is the ‘lightest’ failure – the positive one: you aren’t able to ‘press out’ the weight on your own but can hold it motionless for some time till static failure arises. But this is still not the end: you are unable to hold the weight anymore but can lower it slowly till negative (absolute) failure arises. This process is directly connected with our muscle structure. In negative movement phase they are stronger than in positive.

Do we need Muscle Failure?

Half and half. Failure training in itself doesn’t guarantee growth of muscle mass or strength; only systematic load progression of target muscle can do it. To put it in other words, if you can follow the overload principle without achieving muscle failure – than you simply don’t need it.

Still, positive muscle failure is usually the best guarantee that your load is enough for muscle growth. If you stop at the moment when you can do at least one more repetition (when you didn’t reach muscle failure) then you most probably didn’t reach your last result and won’t be able to increase it for the next training. But if you managed to exceed the planned quantity of reps without reaching muscle failure – then it means that you’re a genetically unique person and I congratulate you on this: you simply don’t need failure.

For the next half a year you don’t need negative training. This training type is very effective for strength growth but is rather dangerous for your health. In the very beginning it’ll be less effective in comparison with classic positive failure training. There is a time for all things.

The key idea about Muscle Failure is the following: don’t strive for it, don’t think of it. Strive for increase of workout loads (increase your training weights). Than you’ll understand what muscle failure is and why it’s almost impossible to increase weights without it very soon.