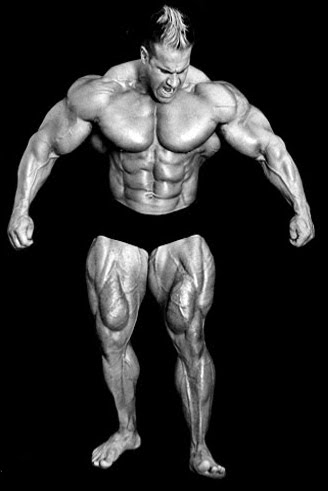 I was born August 3, 1973 in Worcester, Massachusetts. Worcester is centrally located in Massachusetts. About 50 miles west of Boston. I grew up in a small town called Sterling, which is a suburb of Worcester County. I was born the youngest of seven, 3 brothers and 3 sisters. My dad was a superintendent of the highway department and my mother worked in finance at a military base.

Cutler started working in his family’s concrete construction business, Cutler Bros. Concrete, at the age of 11, and started training when he was 18 years old as a senior at Wachusett Regional High School. He graduated from Quinsigamond Community College in 1993 with a degree in criminal justice. His first contest was the 1992 Gold’s Gym Worcester Bodybuilding Championships, at which he took second place. He currently lives in Las Vegas with his wife Kerry and three dogs.

My childhood was an active one. I enjoyed riding my bike and playing neighborhood games such as kick the can and hide and seek. I rode ATV’s and worked on my family’s farm which consisted of pigs, goats, chickens, and cows. I worked in my brother’s concrete business from early on and developed quite a physique for myself. This physique was the foundation for my bodybuilding career.

In high school I played football. I had a vast group of friends and was popular with everyone. I did the usual high school party routine and really enjoyed my years at Wachusett Regional High School. My high school consisted of 5 towns: Paxton (Wachusett), Rutland, Holden, Sterling and Princeton.

In the beginning, I trained only to look better, but my training quickly led to competition. I competed at the age of 19. My first show was the Teen Nationals in Raleigh, NC. I placed first. This was the start of my bodybuilding career and love for competing.

My girlfriend Kerry and I moved in together in Worcester. I began training for pro status. The years went by quickly. I worked at different jobs, while Kerry was pursuing her nursing degree. In 1994, I met a person who gave me the guidance and support I needed to become the best bodybuilder and business man.

Bruce Vartanian was a local bodybuilder and business owner. Bruce took me under his wing and taught me the ins and outs of the business. He taught me what I needed to do to be the best. We trained together along with my diet mentor, Chris Aceto. We built a physique that would sweep the Nationals in 1996 to gain professional status. I was bombarded with contract offers and eventually signed on with Joe Weider.

I took 1997 off from competition and came back to debut in 1998 at the Night of Champions in NYC. I placed 11th- a little off from my best. I went back to old school dieting and training for the 1999 season. I placed 3rd at the Pro Ironman Invitational and 4th at the Arnold Classic. Later that year, I placed 15th at the Olympia.

On July 9, 1998, I married my girlfriend of seven years, Kerry. We got married in a small private ceremony at the Rio Hotel in Las Vegas.

In 1999, Kerry and I moved to Aliso Viejo, CA. This was a great business move for both of us. Kerry began a job in nursing at Hoag Hospital in Newport Beach. I continued to train with the hunger to move up in the bodybuilding ranks.

In May of 2000, I became the Night of Champions Winner, putting myself further ahead in the rankings. Kerry and I purchased our first home in CA in June of 2000. This was a great step for us, as we always wanted to live in CA.

I competed next at the 2000 Olympia placing 8th. The week following the contest, I was runner up to Ronnie Coleman (three time Mr. Olympia) at the English Grand Prix and the Italian Grand Prix.

In November 2000, I made a crucial business decision and began a new relationship with ISS Research. ISS is based out of Charlotte, North Carolina. They approached me with an offer that I could not refuse. ISS Research gave me the opportunity to take a whole year to prepare for the 2001 Mr. Olympia. I did many appearances through 2001 and really focused on preparing to do my best in October 2001. I went on to place a controversial 2nd place to Ronnie Coleman. The publicity launched my career even further and catapulted me to the next level.

After the “O” in 2001, I began preparing for the 2002 Arnold Classic, which I won unanimously over Chris Cormier.

Many journalists have thus far declared 2003 as “The Year of Cutler”. It was at the beginning of the year that I won three consecutive contests – the IronMan Pro Invitational, the Arnold Schwarzenegger Classic and the San Francisco Pro Invitational. I finished off the year with two more victories, the English and Dutch Grand Prix while landing runner up on three occasions: Mr. Olympia, Russian Grand Prix and the GNC Show of Strength. 2003 was a very busy year for me; eight contests, five victories, three seconds…not bad!!!

I also began a new relationship with MuscleTech Research and Development in December 2003. I will now endorse the largest sports supplement line in the fitness industry. MuscleTech has many future plans for the release of the most breakthrough supplements on the market.

At the beginning of this year, 2006, I stated on my website that this would be the year that I would have my name etched into bodybuilding history by becoming Mr. Olympia. On September 30 I fulfilled my destiny.

Kerry and I now live in Las Vegas, after spending many great years in California. I will continue to train here in Vegas and do all I can do to solidify my position as the #1 bodybuilder in the world.