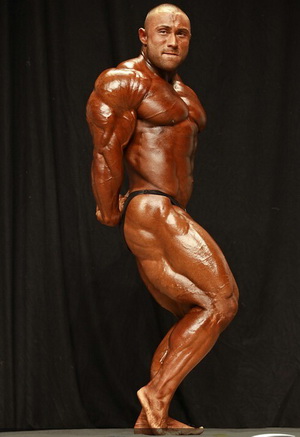 We’ve been monitoring Jason Huh since he won the 2004 Teen Nationals, and even then, as a 188-pound light-heavy, he had above-average calf development. Six years later, he weighed in at 256 pounds this July before winning the super-heavyweight class and overall at the USA Championships. His calves had kept pace with the rest of his ballooning physique. Even amongst the best NPC amateurs, they were still a strong point, as they will surely be when Huh first strides onto an IFBB Pro League stage. One reason for this is that he never takes them for granted. The 26 year old continues to pound his lower legs once per week with high volume and intensity.

* He starts with eight sets of seated calf raises to emphasis his soleus muscles.

* He pyramids his first four sets of seated calf raises, and then does drop sets on his last four sets.

* Huh has tried all rep schemes, but he prefers the middle range of 10-14 for calves, just as he does for other bodyparts.

* He emphasizes a full stretch and full contraction on every rep.

* Stretching between sets is crucial.

NOTES: Floridian Jason Huh, 24, placed third in the heavyweight class of the 2008 NPC Nationals. He works calves once per week along with hamstrings. All sets are pyramided. This routine is finished with four 30-second stretches per calf. Huh says, “I always emphasize the stretch and contraction. The calf muscles need to be stretched a lot to grow.”