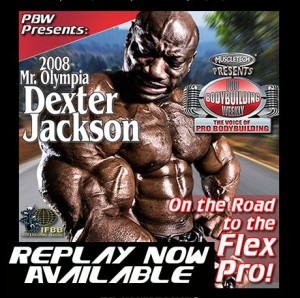 With just 10 days till the inaugural Flex Pro, Dexter Jackson made a tour stop at the PBW studios for a strategy discussion and the usual round of rumor control. To get things started, when asked about reports of his double digit muscle gains, The Blade set the record straight. “First of all let me squash all the rumors. I’m not 15 or 20 lbs heavier, or nothing like that.” Dexter continued, “But I have put on a couple pounds. And a couple pounds on my physique will show.” Later in the show, when asked about how he would have scored last years Olympia showdown between Phil Heath and Jay Cutler, Dexter admitted that he was not in agreement with the judges. — Find out who Dexter would have placed on top at the O and get an inside look into what the former Mr. O has in store for Branch Warren when they meet again in Columbus.

Hosted by Dan Solomon, Lee Thompson and Chad Nicholls, if you missed the Live broadcast, head on over to www.BodybuildingRadio.com and, as always, check out the PBW replays right here on the PBW Player located at the FlexOnline home page!