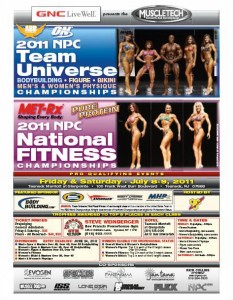 Upcoming weekend bring us an important event that will take place in Teaneck, New Jersey. The 2011 NPC Team Universe Bodybuilding, Figure, Bikini, Men’s Physique, and Women’s Physique Championships in conjunction with the NPC National Fitness Championships will open its door for over 400 competitors on July 8-9.

This year event has added a few new IFBB pro cards and IFBB Pro Status to the following divisions:

• Figure over 35 Overall and over 45 Winners

The host hotel for this amazing event is Teaneck Marriott.