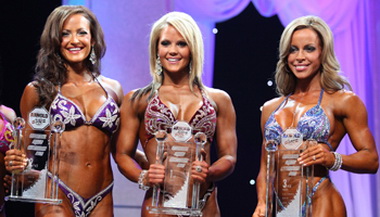 Ladies action has just concluded at the 2011 Arnold Classic at the Veteran’s Memorial Auditorium in Columbus, Ohio and the night’s big winners are Nicole Wilkins, Adela Garcia and Iris Kyle.

FIGURE It was a history making night as three Figure Olympia champions competed on the same stage for the first time: Jenn Gates (2008), Nicole Wilkins (2009) and Erin Stern (2010). But from the beginning of prejudging it was clear that it would come down to Wilkins and Stern, the rivalry that’s shaping the sport of figure. And by the looks of things, this won’t be the last time they heat it up.

Wilkins beat Stern here last year, only to lose her Figure Olympia title to her seven months later. Tonight, Wilkins got her revenge on the strength of her overall shape, proportion and a considerably tighter physique than she had at last September’s O. Wilkins is now tied with Mary Lado for two Figure International titles, putting her one behind Jenny Lynn’s record of three.

Ava Cowan placed third in her Figure International debut, with Felicia Romero in fourth, Cheryl Brown in fifth and Courtney West in sixth.

The top six qualify for the 2011 Figure Olympia.

FITNESS Adela Garcia’s symmetrical physique and high-energy routine punctuated her status as the sport’s most dominant athlete as she continued her five-contest win streak dating back to 2009 – including two Figure Olympia titles (she holds the record with five, total). Her fourth victory ties her with Susie Curry for most Fitness International wins.

In a repeat of the 2010 Fitness Olympia, Tanji Johnson and Trish Warren – the former with a terrific routine – finished behind Garcia in second and third place, respectively.

Oksana Grishina, finished in the eighth spot. Her “Avatar” routine, complete with face paint and blue and black-striped body suit, had the crowd in stunned silence that eventually erupted into the loudest ovation of the evening.

The top six qualify for the 2011 Fitness Olympia.

MS. INTERNATIONAL Iris Kyle, battling an illness for the past five weeks, pulled out a victory to earn a record sixth Ms. International title. Kyle, despite being a tad off from the form that brought her the Figure International and Ms Olympia titles in 2009-10, relied on her shape, lines and detailing to pull ahead of a tough field of challengers.

The top six qualify for the 2011 Ms. International.