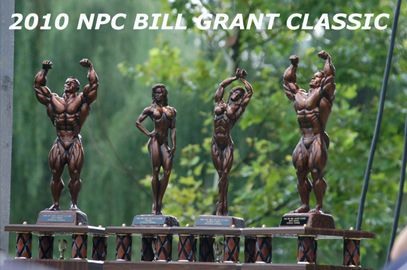 The 2010 NPC Bill Grant Atlantic City Classic was an AMAZING show full of talent, well-conditioned physiques and physical beauty. The show opened with Guest Poser IFBB Pro Vinny Galanti who is just two weeks out from the Sacramento Pro. When Vinny came out on stage the audience was stunned by his new look. John Kemper, NJNPC Chairman, was ecstatic about Vinny‘s new look and conditioning. He was bigger, fuller, and tighter than ever before. He looked absolutely fantastic and this is the best we have ever seen him look. We were honored to have Vinny Galanti, Former New Jersey State Champion perform on our stage. Vinny’s first time meeting Bill he emceed the contest at his first competition.

Our next performance of Dance/Break Dance/Hip Hop was a father and son duo, Kershel & Jaiden Anthony of Project K. Their performance was so AMAZING the entire Expo and all events stopped when Kershel Anthony came out on stage performing to Michael Jackson. Jaiden (8 years old) came out to join his father and together their performance captivated the audience.

Our special celebrity guests provided by Scott Epstein’s Publicity Management Services (PMS) made their way on stage to support all the competitors including their own, Jackie Haas, Former WWE Wrestler and Overall Women’s Figure Winner of the 2010 NPC Bill Grant Atlantic City Classic.

Sean Waltman, WWE/WCW/TNA Superstar “X-Pac”
Leon Brown, whose famous back shot is seen in the middle pages of Pumping Iron, showed his support by returning to the Classic once again and presented awards to the Masters Men competitors. Italian IFBB Pro Bodybuilder, Alessandro Savi and the 2010 NPC Bill Grant Sportsfest Classic Overall Men’s Open Winner, Terrance Hawkins came out to show their support and presented awards to the competitors.

Vinny Galanti stunned everyone with his new look and conditioning. Bill Grant was honored to have the Former New Jersey State Champion perform at his show in Atlantic City. Project K, an AMAZING duo of father and son talent, captivated the audience with their Dance/Break Dance/Hip Hop performance. The entire Expo and all events stopped when they came out on stage. At then end of the show Rap Legend Melle Mel, former leader of the Grandmaster Flash and The Furious Five, Rock and Roll Hall of Fame inductee performed on stage. Just when you thought it could get no crazier, Melle Mel took his shirt off, Bill Grant snuck up behind him and started posing, then Rob Terry joined in and took his shirt off. It was a free for all and the audience went wild. This was a show to be remembered, WOW!

Bill Grant would like to thank the following individuals and organizations for their support. We could not have done this without them. A very special thank you to Scott Epstein for providing all celebrities and adding another level of entertainment to the show.