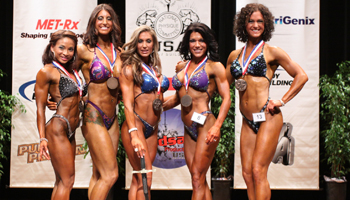 Heather Mae French continued her hot streak on Saturday, winning her third contest of 2010 at the California Pro Figure Championships in Culver City, California. French, who won the New Zealand Pro in March and the Pittsburgh Pro in May, successfully defended the title she won a year ago.

“I truly believe that having the right people on my team is what determines success, so having Kim Oddo as my trainer has really been an uplift in regards to my training and nutrition,” Mae French said. “I’m still trying to find that balance of being full and still being conditioned. We’re getting there. I’m so excited to bring that to the Olympia. I’m going to be Pittsburgh full but with this conditioning, so that’s the goal.”

From the get-go, French clearly outclassed the rest of the field, earning straight firsts on the judges scorecards in both the one and two-piece rounds.

Katina Maistrellis and Carin Hawkins placed second and third, respectively to round out the top three and grab the final two qualifying spots for the 2010 Figure Olympia on September 24 in Las Vegas, Nevada.