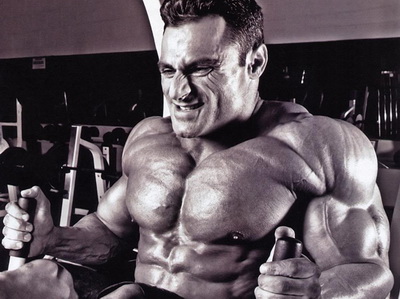 In the suffocating sweat sock of Florida’s Pompano Beach, with its heavy hissing midday air, motorists taking to the freeway do so with a dread not unlike that of entering Erebus, that benighted pit stop on the way to Hades; Ahmad Haidar sees that heat-shimmering snake of macadam wiggling its way into the city and eagerly straps it on like a leash.
Five days a week, year in, year out, Haidar has been lapping up that highway like a puppy dog, loving every mile, and the farther he drives, the hungrier he gets. His trip from home to the gym takes 45 minutes, but he wouldn’t mind an even longer time to stew. This is his chance to become immersed in the prep for his chest workout, where he can plumb his passion and start the momentum for what’s to come, running through every exercise, set, rep and sensation he’ll face. “When I walk through that door,” he exclaims, “I’m at full boil, ready-pumped and ready to go.”

His is a silent burning, but one as evident as Florida’s steam. At first glance, he’s laconic, almost shy; but a slight thing, like the timbre of his voice, reveals more of his character than battles where thousands fall. The more Haidar describes the pile-driving pump he’ll feel in his upper chest, the delicious pain that will tear at his outer pecs or the drum-tight fullness he’ll build with a forced rep, the more you share his excitement.

Bodybuilders brag about willing certain means to achieve certain ends, but Haidar extols the converse: throughout his 20 years of gym life, he has allowed experience to have its way with him, pitting one random training style against another, until only the best was left standing. Now, at 38, Haidar has arrived at the truth and has discovered that, as with all truths, it is blindingly simple: the best chest routine is based upon the four most basic exercises, each one performed with four sets of 10 repetitions. Chaos has congealed into predictability.

“That was not always so,” Haidar confesses. “When you’re inexperienced, it’s not so much a matter of discovering what works as it is of discovering what doesn’t work. For example, I used a barbell for just about all of my chest exercises in the same workout–flat-bench presses, incline barbell presses, decline barbell presses–but I wasn’t building enough peripheral pec fullness or lower and medial separation.” He pauses, then adds, “But you learn.”

His most valuable lesson? “Have patience, no matter how long it takes. Listen to others and eventually you can look back and notice what worked best for you,” he says.

BODY SLAM Ironically, Haidar’s introduction to the art of muscle was not through weight lifting. His uncle, Hassan Bchara, who earned a bronze medal as a wrestler in the 1980 Olympics, took Haidar and his brother to a gym to learn wrestling. Then came the fateful day when Haidar’s uncle suggested that he needed to work out with weights to gain muscle. To wrestle, he was told, he needed a strong body.

“I started liking the weights better than I liked wrestling,” Haidar says. “What I liked better was feeling the muscle getting pumped and actually seeing it bulging bigger and harder. It was an immediate sensation. It was exciting, and the more I felt the muscle working and pumping, the more I wanted. Wrestling did not give me that feeling.”

Haidar was hooked on bodybuilding, and when that happens, its siren companion is a twinge of vanity that masquerades as motivating pride. “When you’re young,” Haidar admits, “you want to show off a little bit–’Oh, look, I have muscles’–and I felt a little bit of that when I started competing. I wanted to compete in Mr. Lebanon, and when I won Mr. Lebanon, ‘Oh, I want to win the Arab Championship’; then this, then that. Step by step. I still feel that way. My goal, now, is Mr. Olympia.”

Patiently, he pursues the idealist’s goal of perfect balance for every muscle group in his body, as well as his muscular infrastructure. He doesn’t want his upper pecs, for example, to cantilever over his center or lower pecs, nor his lower pecs to jut prognathously past the uppers. Likewise, he wants his outer-pec sweeps symmetrical with his inner pecs.

To this end, he employs three different chest routines that rotate sequentially in a Monday-through-Friday, five-days-on, two-days-off training split, in which he covers his entire body in four days. Bodypart order is chest and triceps on one day, followed by legs the next, shoulders and triceps the day after that, with back and traps the following day. This means that his Friday workout returns to the same bodyparts he trained on Monday. It also means that the bodypart workout sequence is different the next week. Furthermore–and this is a big furthermore–Haidar uses three different chest routines that rotate sequentially with each workout, further complicating things.

For his next chest workout, the order is incline barbell presses, flat dumbbell presses, incline dumbbell flyes and finishes with standing cable crossovers or decline presses. The movement he selects for the last exercise is determined by whether he feels his chest needs more pump or more fatigue at that point. If the former, he’ll use the dumbbells or cables; if the latter, he’ll go with heavy decline barbell presses.

“In every workout,” Haidar says, “I try to focus on each chest muscle independently, with separate exercises for upper pecs, middle pecs and lower pecs.”

PUMP PLAN To economize on energy, Haidar is parsimonious with warm-ups, allocating only one set of 10 reps at 135 pounds for his first exercise, the bench press. From there on, he pyramids through four more sets of 10, adding a pair of plates at a time–225, 315, 405–up to his max set at 455, which he usually takes to failure at six reps. “I don’t like to do fewer than 10, but for power, it has to be done,” he explains. “At all times, though, I have a spotter with me, not only to help me get two more forced reps, but to stay with my movements, so that I can perform every rep, even the heaviest, slowly and with perfect control. Unless I do that, I can’t feel the pump; the pump is what I want. For some other muscles, such as biceps and calves, I want a burn; for chest, I want a pump.”

From here on, no more warm-ups. Haidar charges into the first set of his remaining exercises with full power; again, four sets each, targeting 10 reps per set, but hoping, on the fourth set, to reach failure at eight reps, with two more forced. Incline dumbbell presses, for example, begin with 120-pounders, then 130s and 140s, all for 10 reps. His final set, with 150s, is for, as he says, “as many reps as I can.”

Dumbbell flyes, too, are four pyramided sets, again with 10 reps through the first three. The last set is eight reps, plus two forced. Haidar warns: “With flyes, I make sure I do not bring the dumbbells lower than chest level. That would invite injury.”

The only exercise for which the angle does not change in successive workouts is his last: standing cable crossovers. That’s because Haidar performs them in the only style that’s worthwhile: one that activates the most muscles through a greater range of motion and with the most resistant contraction. “I mimic a most-muscular pose,” he says, “bringing my hands together at a low angle, to hit my lower pecs; I do not cross my hands. I use a lot of weight for four sets of eight to 10 reps, and I flex hard, with a peak contraction.”

Surround and conquer is Haidar’s strategy for chest: build a foundation of mass by means of old-fashioned free-weight movements, then attack the pecs from all angles, to tweak their peripherals and give them the definition that has earned him the reputation as bodybuilding’s beau ideal of refinement.

Four to grow by

Find the routine that works best for you. Learn from the pros, but don’t copy them. I followed Arnold Schwarzenegger, Samir Bannout and others, but the time came when I had to modify those lessons to do what worked best for my body. Listen to your own body. You will find that some exercises your idol uses won’t necessarily work best for you.

Don’t overtrain. Yes, there is such a thing. It’s possible to burn a muscle to the point where it no longer fires. If you’re using heavy basic free-weight exercises and going to failure, 16 sets per muscle group are enough.

Ideal repetitions are eight to 10, but push the weight. Make sure the eighth or ninth rep is a failure rep; then, use a spotter for forced reps. If I can get 10 reps without a spot, it’s time to increase the weight.

Rest between sets only long enough for your training partner to do his set. Don’t let the pump subside; don’t lose your intensity. Your body and your mind need to retain the sensation of the previous difficult set.

Haidar trains Monday through Friday, with Saturday and Sunday off; however, he covers his entire body in four days, which means that his Monday workout is repeated on Friday. The workouts then continue, in rotational order, the following week.