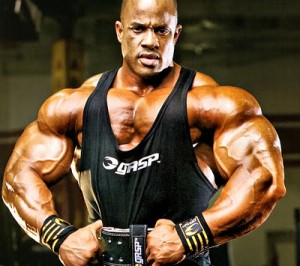 Yes, that’s me with IFBB Pro Victor Martinez at the offices of supplement company MHP. And yes, he IS wearing a “The Goonies” movie T-shirt! At the largest fitness/supplement trade show in Europe, Chris Cormier fought Victor Martinez last weekend! The fight took place at the annual FIBO trade show which in Germany. When the fight broke out, tables, chairs, protein powder and nitric oxide stimulators flew and people fled the hell out of the way! Okay, no protein powder or nitric oxide stimulators flew but you get the picture! Now after such an incident, most pros would may have dodged reporters and their fans and try to just sweep it under the rug. But like a true champion, Victor Martinez issued a statement online about the situation via MuscularDeveopment.com:

“Just wanted to take this time to send my apologies to MHP, MD, Weider, Exhibitors and most of all my fans. As most of you know, this past weekend there was an incident that happened between Chris & I. It occurred at FIBO & sadly, I wished it could have been handled in in more professional way, but, it wasn’t. I’m happy to say though that Chris & I have settled our differences and look forward to the future without any problems. For those of you that are curious to know what it may have been about, lets just say it has to do with comments that was said to each other over the years. Sorry to the clowns in that they hoped that it would have been a bigger story haha. Me & Chris have known each other for far too long to let this go unresolved the way it did. The rest is history and I hope that my fans can let this go as such.”

I think this says a lot about Victor’s character and his willingness to be open and honest if he messes up on something. It’s also admirable that he apologized to not only his magazine sponsor (MD) but also his supplement sponsor (MHP). Without sponsors like MD and MHP pro bodybuilders would have minimal exposure and of course minimal cash! Victor handled this one well. It should be noted also that according to Ron Harris, Chris Cormier picked the fight with Victor.