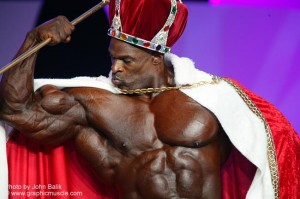 Amidst brambly weeds in the sweltering Texas heat is a kennel, and in the lead pen–reinforced with steel bars so the occupant can’t tear through the chain-link door and kill one of its coworkers again–is a pit bull named Max.

Max is the “muscle” that delivers the crippling bites when he and his expertly trained kennel mates hunt wild boars in the dark. On all but the hottest nights, the dogs wear Kevlar, and even then the tusks of a 400-pound razorback can end a dog’s days.

Max has bucked the odds and thrived as the leader of the pack for more than seven years. Despite all challengers, so has the man who toils just a few feet away, on the other side of a crumbling gym wall: bodybuilding’s undisputed top dog, Ronnie Coleman.

It’s 98 degrees and exactly four weeks before the 2005 Mr. Olympia when photographer Kevin “Hardcore” Horton and I cruise down the craggy lane, past auto repair garages and junked autos, to MetroFlex Gym. “Home again,” Horton exhales. We love this place! We’re in Arlington, at the country’s most hardcore gym, where the world’s top bodybuilder trains alone. This is what I journeyed halfway across the country and Englishman Horton journeyed halfway across the world to capture. This is what bodybuilding is all about.

Max, his canine cohorts and MetroFlex belong to Brian Dobson, who carries only a spear and a knife on boar hunts and typically hikes 15 miles through rugged woods in the dark. If you ask whether Mr. Olympia ever joins in, Coleman’s quick answer is “Hell no,” and the three best reasons are long hike, rugged woods and dark–factors that led to Dobson blowing out a knee.

Despite using prodigious weights, a significant part of 41-year-old Coleman’s success is the fact that he has never suffered a serious injury.

Before he begins his leg workout, Mr. O spends no time stretching or repping out light leg extensions. Instead, he strides to the squat supports and searches for a barbell. After a warm-up set with 135 pounds, he pronounces, “That ain’t the right one,” and begins the search anew.

Having found a barbell without much bend, Robert Lee slides two plates on each side. Lee (who placed fourth in the bantamweight division at the 2004 Nationals) trains in the morning, but he returns in the afternoon to load weights for his good friend.

Coleman does another warm-up set of 12 rapid deep reps with 225. Between sets, he stands with his colossal forearms draped atop the bar. Lee slides another plate on either side, and Coleman calls out the chorus of 50 Cent’s “What Up Gangsta?” just before squatting a dozen times with 315.

Before 405, Coleman cinches up his powerlifting belt. “Getting small,” he says over the thundering music.

A moment later, Coleman announces, “Light weight,” and to him 405 is indeed a light weight. He squats 10 quick reps, glutes to ankles each time, nearly as effortlessly as he did 135.

“Squats are the most important exercise,” Coleman tells me. “I’ve always done squats. I do them every leg workout. One workout I do front squats and the next time, like today, I do back squats. I don’t like to do fewer than 10 reps. I lift heavy but for reps. If I can’t get 10 reps, I don’t do it.” Enough warm-ups. Lee slaps two 45s on each side, bringing the total to 585, and Coleman takes a seat on a wooden bench to wrap his knees.

“Yeah, buddy!” he shouts as he winds an elastic band around one leg. “Light weight!” When both knees are wrapped, he stands, and Lee helps him cinch his belt. “Ain’t nothin’ but a peanut!”

As he positions himself under nearly 600 pounds, he shouts, “Yeah, buddy!” again. Then he rises up to remove the barbell from the supports. He doesn’t use a spotter, and there are no safety supports. Everyone watches.

He squats into the hole, far below parallel, and he rises up. One. Two. Three. DMX is spitting out curses. Four. Five. Rapid methodical reps. Six. Seven. His face contorts with pain. Veins bulge out of his neck and forehead. Eight. Nine. His tenth rep with 585 is as deep and steady as his first.

He reracks the bar and saunters back to the wooden bench to undo the wraps. Mr. O squats heavier than heavy–not merely doing a low-rep max, but using a staggering weight for 10 reps when every fiber of his body is telling him to quit after four. That’s what Coleman’s training is all about.

“It’s war!” Lee echoes, and he brings the champ a roll of toilet paper.

Coleman tears off tissue to stay the blood trickling out of a nostril. What’s war without blood?

With a crimson tissue stuffed in one nostril, the soon-to-be-eight-time Mr. Olympia strides across the gym to where Lee is already loading plates on an old Nebula 45-degree leg-press machine. I count one 100-pound plate and 12 45s on each side (1,280 pounds). Coleman takes a relatively close and high stance on the platform for his dozen reps. Unlike his squatting technique, his range of motion here is shallow.

Lee heaps another six plates on top (1,550 total). Again, Coleman pumps out 12 reps. Between sets, he will sometimes exchange comments with Lee, but mostly he stares at nothing. He often twitches his head, like a nervous tick, to shake free torrents of sweat. Lee packs on another four 45s (1,730). “Yep!” Coleman grinds out 10 reps.

Four more 45s bring the total to 1,910. Including the weight of the moving apparatus, it’s fair to assume Coleman literally leg presses a ton. Ten times in succession. “The leg press is a meat-and-potatoes lift,” Coleman states. “I just stick to the basics. If it ain’t broke, why fix it? Squats, leg presses, lunges, these are what grew my legs, and they’re still growing my legs.”

When Coleman strides outside MetroFlex and slips on his shades, one of Dobson’s workers has already set up a 135-pound barbell. The champ hoists it up and onto his shoulders and begins lunging down the wrinkled lane of faded asphalt.

He travels approximately 50 feet one way, taking deep, long and relatively rapid steps. Then he turns around and lunges back for one of his two sets under the punishing Texas sun.

To observe this is like watching Lance Armstrong pedaling in the Alps a month before one of his Tour de France victories or Tiger Woods on a driving range firing balls into the blue yonder.

Larry Scott had preacher curls, Arnold Schwarzenegger had supinating dumbbell shoulder presses, Dorian Yates had underhand barbell rows, and Ronnie Coleman has walking lunges–a lift he made his own. It may be difficult to remember now, but before Coleman started winning Olympias, bodybuilders dismissed lunging as something leotard-clad women did in aerobics class. Now, it’s rightly considered one of the hardest of all hardcore movements.

“I’ve been doing walking lunges since 1990,” Coleman explains, remembering the year he won the Texas State Championships. “We used to push a pickup truck–a big yellow Dodge Ram. Brian [Dobson] used to put that truck in neutral and I’d push it all the way to the end [of the lane, approximately 200 yards]. We were just having fun. But then he sold the truck, so we broke out the bar. I’ve done as much as 315, but I don’t usually go over 185 now. Walking lunges have always been great, especially for my glutes.”

AFTER I can see the snaky veins through Coleman’s yellow spandex pants as he takes a seat on the leg extension machine in a cobwebbed corner of the gym.

A FLEX article on the wall behind him captures his younger self, circa 1992; fade haircut with tight curls, peaked biceps and not much else, 75 pounds lighter than the 300 he weighs today. To watch the 41-year-old reigning Mr. Olympia rep out leg extensions just below a shot of the 28-year-old rookie pro is to truly see “before” and “after.”

He does sets of 20 reps with 140 pounds and 160 pounds. Then, after 20 with 180, he rests for 10 seconds and grinds out seven, eyes clenched, head up, mouth contorted. It’s those final seven reps, those that he has to fight the hardest to get when his quads are flooded with lactic acid, that ultimately stimulate the most growth.

Drenched in sweat, Coleman gulps water and pitches the plastic bottle away. It ricochets off the wall. With the pin in the next-to-bottom slot (70 pounds), he works his hams with 15 reps of standing one-leg curls on the right and 15 on the left. Dr. Dre raps “Let Me Ride.”

Between sets, Coleman turns one of the ancient box fans–as big and powerful as an airplane propeller–so it blows his way, and the back draft sucks a tattered American flag straight away from the wall. The levitating flag; the reserve police officer chanting along to gangsta rap; the champ’s $180,000 Bentley just outside; the unparalleled mind-altering mass with details so bold they’re visible through clothes–it all begins to feel like a heat mirage.

I try to maneuver myself back into the fan’s good graces. It’s probably too late for Horton, soaked in sweat, coated in dust. After using the stack (75 pounds) for 12 reps, Coleman adds a 25-pound plate (100 pounds total) for two sets of 10 with each leg.

As each of Coleman’s two weekly leg workouts differ, the next time he’ll do stiff-leg deadlifts and seated leg curls. Today, he follows standing with lying. During lying leg curls, he keeps his hips slightly elevated to place greater emphasis on contractions.

The numbers on the stack were worn away last century, so I count plates to figure he’s using 135. I increase the weight in 15-pound increments before each of his final three sets: 15 reps with 150, 10 with 165 and eight with 180. Despite upping the resistance set after set for every exercise except lunges, the final set of the workout is the only one in which he does fewer than 10 reps.

When people ask me why Ronnie Coleman is the world’s best, my answer invariably comes back to MetroFlex. Coleman has a home gym now, cramped with new shiny machines, and he trains there all but once or twice per week, but it’s the ethos of MetroFlex–pushing a pickup truck, lifting heavier than heavy, pain, heat, dirt, blood–that made him an eight-time Mr. Olympia.

After his thigh workout, Coleman spends 10 minutes stretching his engorged quads and hams. Bodybuilding’s top dog slowly lowers himself to the floor with his colossal legs splayed, doing the splits as he does at the end of his posing routine shortly before he accepts his annual Sandow. He grins and says, “I love being Mr. Olympia.”

* After a brief rest following the final set, he performed an additional
seven reps.