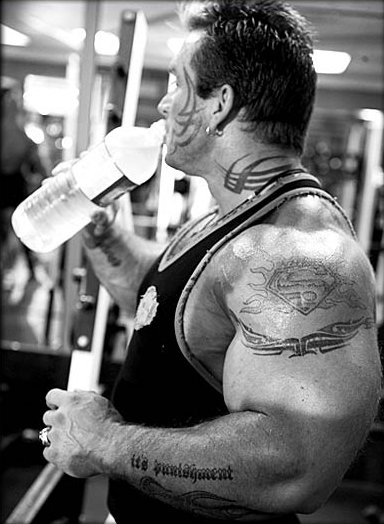 Sliced. Ripped. Shredded. No matter what you call it, you know it when you see it. Achieving such conditioning, however, takes not only a ton of work, but also a ton of knowledge. That’s where we come in, mapping out which supplements can best help you get into your best-ever shape. The following list reveals our top 10 supplemental  fat burners, representing the best ingredients on the market today. The ratings are based on clinical research, anecdotal reports, and availability.

You should remember, though, that despite the fact that these ingredients are ranked, there isn’t a huge difference in effectiveness between the ones that made the list. You can’t go wrong with any of these 10. For example, the first on the list, green tea extract, is not exponentially more effective than the fourth one, carnitine. What you’ll come to realize is that, to get the desired results, your best bet is to combine several of these ingredients (i.e., green tea extract, carnitine and some others).

It is almost impossible to find a fat-burner product that doesn’t include green tea extract, but there’s a great reason why. Research studies confirm that green tea extract can significantly aid fat loss.

HOW IT WORKS Green tea contains compounds called catechins, which include epigallocatechin gallate. EGCG is the main catechin responsible for the thermogenic (fat burning) effect of green tea. Although green tea also contains caffeine, which was originally hypothesized to be the mechanism for green tea’s ability to enhance fat loss, its major thermogenic effect comes from the action of EGCG in inhibiting an enzyme that breaks down norepinephrine, the neurotransmitter involved in regulating metabolic rate and fat burning.

DOSAGE Although drinking green tea is smart, you should still supplement with about 500-1,000 milligrams of green tea extract standardized for EGCG; take it three times daily before meals. Research shows that the body absorbs catechins from the extract better than from the tea.

Again, it’s close to impossible to find a fat burner on the market today that doesn’t supply some form of caffeine, whether it is caffeine anhydrous, guarana, di-caffeine malate or caffeine from green tea extract.

HOW IT WORKS The major mechanisms by which caffeine aids fat loss are by binding to fat cells and enhancing the removal of fat, and by inhibiting its storage in the fat cells. Caffeine also works to increase the burning of fat during exercise and can help increase muscle strength when taken one hour before workouts.

DOSAGE Go with 100-300 mg of caffeine in the morning and an hour before training.

This supplement is clinically proven to both prompt fat loss and boost testosterone levels in men. Forskolin is the active compound in the herb Coleus forskohlii, which is a member of the mint family.

HOW IT WORKS It enhances fat loss by activating the enzyme adenylate cyclase (which is also involved in testosterone production), leading to a cascade of events, including activation of the hormone-sensitive lipoprotein lipase, which allows fat stored in fat cells to be broken down for use as fuel. A recent study from the University of Kansas (Lawrence) found that overweight men taking forskolin for 12 weeks lost considerably more bodyfat and had higher levels of testosterone than a group taking a placebo.

DOSAGE Boost both fat loss and testosterone levels by taking 20-50 mg of forskolin two or three times daily before meals.

Like forskolin, carnitine has been shown clinically to boost fat burning and bolster testosterone.

HOW IT WORKS Carnitine is vital for burning fat, as it aids the transport of fats into the machinery of the cells, where it is burned for fuel. Research shows it improves fat loss during exercise and during low-carb dieting. In addition, carnitine enhances muscle recovery following intense lifting, plus it increases the number of testosterone receptors in muscle cells, which aids muscle growth.

DOSAGE Take 1-3 grams of carnitine in the form of L-carnitine, acetyl-L-carnitine, or L-carnitine L-tartrate with breakfast, pre- and postworkout meals and the evening meal.

Synephrine is the active ingredient in the plant Citrus aurantium, also referred to as bitter orange.

HOW IT WORKS Its structure is chemically similar to ephedrine, but it boosts the metabolism without elevating heart rate or blood pressure, which is why we rate it so highly. Synephrine works by stimulating specific receptors on fat cells that increase the breakdown and release of fat, raising metabolic rate and blunting appetite.

DOSAGE Take 200-600 mg of C. aurantium standardized for 5-20 mg of synephrine, two or three times per day before meals.

Yohimbine, the active ingredient found in the African Pausinystalia yohimbe tree, is often referred to simply as yohimbe. A fairly recent clinical study showed that it was effective in reducing bodyfat in athletes in just three weeks (without a change in diet).

HOW IT WORKS Yohimbine inhibits the alpha receptors found on fat cells (adipocytes) that work to limit the amount of fat leaving those cells and to enhance the amount of fat that gets stored in those cells. By antagonizing the alpha receptors, yohimbine allows the fat cells to more easily release their stores of fatty acids to be burned for energy and makes it more difficult for them to store fat. Yohimbine also helps to keep norepinephrine levels maximized by its effect on the alpha receptors, especially when yohimbine is taken with other supplements that boost norepinephrine release. In addition, yohimbine decreases alpha receptor activity on blood vessels, which results in blood vessel dilation similar to that caused by nitric oxide.

DOSAGE Take 2-10 mg three times a day, with one of those doses being about 30 minutes before workouts.

This extract from the Evodia rutaecarpa fruit can help burn fat and reduce food intake.

HOW IT WORKS It burns bodyfat by stimulating specific receptors in the central nervous system that boost metabolic rate. It also reduces hunger and slows the digestion of food, for a fuller feeling for a longer period of time and a slow and steady release of glucose into the bloodstream. This helps to keep insulin levels from spiking (spikes in insulin can cause greater fat storage).

DOSAGE Take 30-50 mg of evodiamine two or three times per day before meals.

Beta-phenylethylamine, also known simply as phenylethylamine (or PEA), is one of the hottest fat-burning ingredients on the market today. Although clinical studies on its fat-burning effectiveness are lacking, the anecdotal reports are strong.

PEA is a naturally occurring metabolite of the amino acid phenylalanine.

HOW IT WORKS It enhances fat burning by increasing the release of norepinephrine. It also provides feelings of euphoria (which can help with tolerating lower-calorie and lower-carb diets) by boosting levels of dopamine and serotonin in the brain.

DOSAGE Look for a product that supplies about 100-500 mg of beta-phenylethylamine; take it once or twice daily. PEA is now available in the form of beta-methoxy phenylethylamine, which significantly enhances the supplement’s half-life in the body. That helps maximize its efficacy and allows for a single dose to be effective.

Capsaicin makes it on this list because of its strong, clinically proven benefits of increasing metabolic rate, fat burning and reducing food intake through appetite reduction. Capsaicin is the chemical in chili peppers that makes them spicy.

HOW IT WORKS It boosts bodyfat loss by increasing metabolic rate and fat burning through its ability to raise levels of norepinephrine.

DOSAGE Look for capsaicin supplements that list Scoville heat units, and take enough to supply 40,000-80,000 units. Or, take about 1/4 teaspoon of ground hot pepper or cayenne pepper that also lists the heat units. Take either form about 30 minutes before meals.

Arginine is the main ingredient in NO-booster supplements, which are known for increasing mass and strength. Arginine is readily converted to NO in the body.

HOW IT WORKS NO can enhance fat burning due to its ability to boost lipolysis at the fat cells. (Lipolysis is the breakdown and release of fat from the fat cells, which means more bodyfat is available to be burned for fuel.) Arginine also increases growth hormone release, which not only has anabolic effects, but also enhances lipolysis. Yet, arginine’s ability to promote fat loss was just a theory, with no clinical research to support its effectiveness–until this year. A new study, presented at the 2007 annual meeting of the National Strength and Conditioning Association, reported that athletes taking arginine for just four weeks gained muscle mass while simultaneously losing an equal amount of bodyfat without altering their diets.

Most commercial fat-burner stacks won’t contain carnitine, so consider adding it to your stack, especially if you’re following a low-carb diet. The same is true for arginine. You also could buy several of the ingredients and build your own stack.