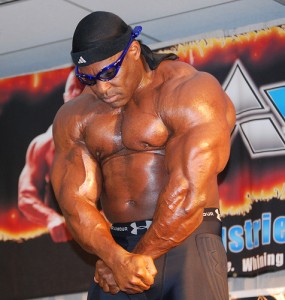 Sure, he had finished third only six months before at the 2006 Australian Pro Grand Prix, a contest that ended his fouryear layoff from competitive bodybuilding. It wasn’t the upper-abdominal cramps  they always came, especially at the big contests. And it wasn’t that he hadn’t been on an Olympia stage before. He had. Five times before this, to be exact, in competitions spanning the globe: in Rimini, Italy, in 1989, when Lee Haney won his sixth Olympia title; in Helsinki, Finland, in 1992, when Dorian Yates won his first; and three times in the United States  the last one, in Las Vegas in 2001, for Ronnie Coleman’s fourth victory.

But this was different. He had been away from the game, and he was older now. They were young. They were hungry.

And Vince Taylor, at 50 years old, wasn’t sure he belonged.

TIME TO HANG IT UP

There was a time, in the early 1990s, when Vince Taylor  the light-heavyweight and overall winner at the 1988 NPC National Championships was a threat to win any contest he entered. There was a time when he nearly did.

In 1991 and ’92, Taylor entered 14 contests. He won nine. In his first Olympia in 1989, Taylor stood toe to toe with Haney, Lee Labrada and Rich Gaspari in Rimini. He beat out Gaspari, but fell short of taking down Labrada and Haney.

Two years later, at the 1991 Olympia  when he revolutionized posing by unleashing his Terminator routine for the first time and garnered a standing ovation  Taylor would again finish ahead of all but two men. Haney, who won his eighth and final Sandow, was one of them. A promising newcomer to the Olympia stage, a 29-year-old from England named Dorian Yates, was the other.

In all, Taylor entered 65 contests from the time he turned pro in 1989 until his retirement in 2002, earning the reputation as bodybuilding’s Mr. Consistency. His record from those shows: 22 wins  which puts him second behind only Coleman in IFBB history  and 64 top-10 finishes, including 51 in the top five.

But in 2002, it was time for Taylor to make good on a promise he made to himself when he started competing in masters competitions in 1996. I told myself, if I ever don’t win a Masters Olympia, it’s time to hang it up, Taylor says.

So, after losing his Masters O title to Don Youngblood in August 2002, when his streak of five wins in as many Masters Olympia contests was broken, that’s exactly what Taylor did.

THE COMEBACK
Retirement was good, as was living in Pembroke Pines, Florida, and representing Pinnacle as a contracted athlete and spokesman. After all the years of traveling and competing, Taylor finally had time to spend with his wife, Randi, and two sons  Vincent Jr. and Isaiah. My training was minimal to none, Taylor says of his routine during those years. I called it my Jane Fonda workout. I was going to the gym, hanging out, talking. My workouts consisted of three or four exercises, two sets each.

Despite the less-than-intense training regimen, Taylor kept his weight around 225 pounds. I was still pretty solid, Taylor says. Presentable.

In October 2005, Taylor decided he wanted to get back onto the guestposing circuit. The only problem was, there isn’t much demand for retired bodybuilders in that arena. A return to the competitive stage was his only option. That was the whole quest, just to get back onstage, Taylor says. I wasn’t going to say I couldn’t do it. I wasn’t going to give myself that option. I said, Let me try to get this thing together by January 1.

Taylor started slowly. On his side was the fact that, despite 24 years of bodybuilding, he had no serious injuries to work around. That was the beauty of it, he says. I formulated a plan to get back to training with my A-B-C approach. I kept it simple. I had to get my body used to the mechanics of training again. After I got that under my belt, I noticed that the muscle memory was returning. I wasn’t pushing the same weight as I was. For the first two months, I’d say I was at about 75 percent.

Once the strength and size started to return, Taylor turned his attention toward formulating a plan of attack. I kind of put together three shows, he explains. The Arnold Classic, the Australian Grand Prix and either the Colorado Pro or the New York Pro. After I didn’t get an invite to the Arnold, I got the chance to go to Australia.

In Australia, Taylor would surprise everyone. Even himself. Amid a field that included eventual champ Ronny Rockel, defending champ Lee Priest, Branch Warren and Mustafa Mohammad, Taylor finished third and, in the process, qualified for the 2006 Mr. Olympia.

Mr. Consistency was back. The next stop on the Vince Taylor comeback tour would be Las Vegas.

FEELING IT
The success in Australia gave Taylor a taste of what used to be. Now he wanted more.

When I got back from Australia, I told myself, It’s time to get busy, Taylor recalls. There was a lot of work to do. I wanted to bring back a credible physique.

To prepare for the Olympia, Taylor returned to the basics, training six days a week, two hourand- a-half sessions a day, one bodypart in the morning, one in the evening. Three exercises per bodypart. Five sets per exercise.

I went back to the patented Vince Taylor push-pull workouts, he says of his training split. That’s what I’d been doing since 1984. The weight loads went up, as they always have. I’d get 10 to 12 reps on a good day, six to eight on a bad day. I concentrated on contracting the muscle and controlling the weight, trying to sculpt through a lot of angled movements. The approach we used for the Olympia was, Don’t try to be bigger than you ever were.

He wasn’t. But he was close. Taylor took to the Olympia stage weighing 230, only a few pounds less than his all-time highest competition weight.

READY OR NOT
It was backstage at the O, during the Friday night prejudging, when the abdominal cramping set in. But there was an easy solution for that  Taylor’s trusty distilled apple cider vinegar, which he had been using to combat cramping since 1989. When the doubt started to set in, when Taylor began to feel as if he no longer belonged alongside the world’s best bodybuilders, the solution wasn’t as easy.

In the past, I felt as if I deserved to be onstage with anybody, he says. But at the Olympia, I was stepping out there with these young, hungry lions. I felt out of place. You look around, and you’re the most outdated person back there.

I remember thinking, I don’t need to be here. I’m not trying to come back here. Not yet.

But he was back  more than he knew. When it was all said and done, Taylor would finish just outside the top 10, in 11th place, in one of the deepest fields in Olympia history. And even though the finish was only the second time Taylor had failed to crack the top 10 at a professional show, it didn’t seem to matter much.

I was probably the happiest guy onstage besides Jay Cutler, Taylor says. I was amazingly surprised at that finish. It was great to be able to shine and get some recognition from the judges and the audience. It made it a must to get back onstage in 2007.