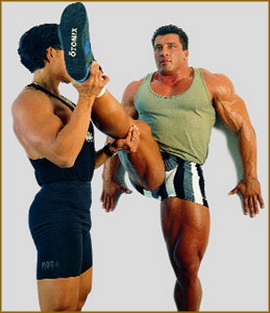 Friends, I would never start writing this article, if I was not convinced about its importance. I will talk about stretching, the one which every bodybuilder knows that it is useful and … boring. Being bodybuilder with experience, I know from my own practice, how difficult is to force yourself to do stretching exercises. Before training – it’s easier, but between heavy sets or after workout when knees bent, here is hard at all. That is why when I read a post about unimportance or even prejudice of stretching exercises I forget about them for some time. And I will never remember about it, if not a story that happened to me. Training a lot I could not build my hamstrings. My long time efforts noticed coach from the gym I am training, until he finally gave me an advice to spend regularly 15-20 minutes for stretching hamstrings before exercising. I decided to try it. And what do you think? Within 4 days my weight went up! But six weeks later I could not recognize my legs! I immediately began to stretch other muscles. And here, too, was waiting for me full triumph! And the weight and volume growth in the abruptly gone! The results as you can image was excellent.

I understand that my personal experience for many is not an argument. I will retell what I read in the specialized literature. In 1992 in Australia was made an experiment that otherwise as sensational could not be named. A group of bodybuilders were divided into two groups with a classic training program with emphasis on the bench press. However, in addition the first group has to stretch intense shoulder girdle muscles. Two months later the first team forwarded the second by 15%! If American scientists would not interested in this surprising result nobody would ever know about it. And again serious scientists have put an objective experiment on the two groups of athletes.

The both group had to train hamstrings, the difference was that the first group of athletes had to stretch their muscles. According to the results both groups have increased strength in hamstrings, but the first one was in advanced with about 19%!
So how does science can explain the phenomenon? So far, unfortunately, when talking about stretching the scientists have only hypothesis. Actually, muscle strength depends not only on its ability to powerfully shrink, as previously believed, but from elasticity of muscle tissue. In other words, the muscle must be able not only to shrink, but also to stretch beyond its normal length. The level of muscles stretching and shrinking – is interchange of muscle tissue characteristic, folding into a single indicator of ‘quality’ or in other world its strength and endurance level. The conclusion is: the classic training brings limited results, just add stretching exercises and potential of your muscles power will increase. 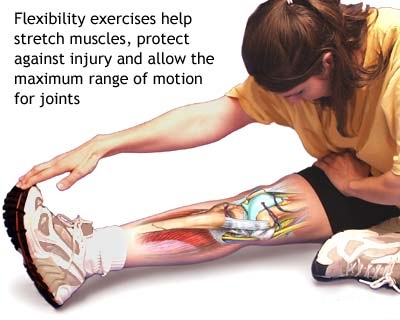 However, this theoretical point of view, but what about practice? There are also many interesting things. In Canada, lives the World Leader in Athletes’ Training Tudor Bompa. Here is his opinion: “To get the most from training programs of bodybuilding, you have to work hard. The reason is that only such training provides bulk up of muscle. Limited motion mainly develops strength – this is the basics of the science of strength training. In order to perform movement with the full range of motion, you need to have flexible joints. To have flexible joints, it is necessary to stretch actively. Shortly, stretching in bodybuilding is on the first place … ” However, this is general argument, as to the practical specifics, all Bompas’ wards stretched to 6 times per week for half an hour. Almost all of them are competing bodybuilders with great experience that have to train with huge weights.

Here’s another revelation that belongs to another American scientist. Pain in the muscles after intense training is caused by numerous ruptures of muscle fibers. It is considered to be a “good” pain, because it indicates the intensive “pumping” your muscles. Meanwhile, sports medicine has not found still a direct relationship between after-workout pain and muscle growth. It seems that the pain does not give any benefits in building muscles. It was also found out that after-workout pain is typical only for beginners’ athletes. Professionals do not feel it, even after the exorbitant loads. Because of the “rigidity” of the fibers, the muscle is unable to either properly shrink or properly stretch. As a result you have numerous ruptures of muscle fibers and pain.