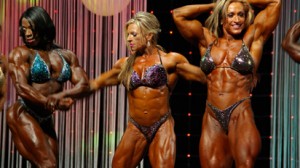 There are certain parallels with men’s and women’s bodybuilding. To make it simple, let’s concentrate on the pinnacle of each sport – the Olympia stage. The first Mr. Olympia contest was held back in 1965 and was not even a fraction of the hyped-up weekend event it is today. Fifteen years later, the women had a contest of their own which was originally titled Miss Olympia. Rachel McLish earned the title in that inaugural show, which had graduated from the earlier bikini contests from yesteryear. The Texas brunette remained at the top of the sport, finishing as the runner-up to Kike Elomaa in 1981 and regaining her crown the following year. In these early days, George Snyder promoted the Ms. Olympia and hand-picked the contestants. It was held separately from the Mr. O in an attempt to garner interest for the sport. After one win by Carla Dunlap in 1983, Cory Everson took over and began a streak six consecutive wins and eventually became the only woman to ever retire undefeated as a pro. It was during this period that “Pumping Iron II: The Women” was released. NBC also broadcasted the Ms. O as part of their “Sportsworld” programming.

At the same time, Lee Haney was collecting Sandows in the men’s shows. Bodybuilding had two marketable faces with him and Everson and were a big part of the fitness revolution. Everyone just had to have a gym membership in those days as a status symbol and looked at the physiques of Mr. and Ms. Olympia as long term goals. In the 1990s, what may have seemed attainable by the average Joe or Jane exploded overnight.

Dorian Yates grew larger with every Olympia he won and Lenda Murray became the top female on the scene. The Michigan native matched Everson’s mark and set a precedent for years to come as far as the size of women’s physiques on the stage. The IFBB apparently did not fully agree and felt the need to make some controversial changes following the 1991 Ms. Olympia, which was the first to be televised live. Murray barely edged out Bev Francis, a former Australian powerlifter, by a single point. In 1992, Ben Weider and the rest of the personnel running the federation put a set of guidelines in attempting to “feminize” the sport more and that the contestants should not come in “too big.” The fans apparently disagreed with this and booed decisions in other shows that awarded smaller contestants. With a crossroads in front of them, the IFBB loosened the Murray’s domination continued until she was unseated by Kim Chievsky, who had a physique similar to Murray’s. She then won three more Ms. Olympias before switching to fitness competitions. While the women were remaining large-framed, Ronnie Coleman took it to the next level. “The King” ruled the men’s division with a frame that nearly hit 300 pounds on stage.

By the year 2000, changes were on hand for the Ms. O. The contest was incorporated as part of Olympia Weekend and held the day before the men’s show, weight classes were established and another attempt was made to downsize the competitors. If that ever occurred remains a question, as Lenda Murray made a successful comeback after five years away to retain her title. She won the heavyweight and overall classes in both the 2002 and 2003 shows. Following that, the baton was passed to Iris Kyle, who has won five of the six last Ms. Olympias. Although she is a gifted athlete, Kyle has been the focus of much discussion as to why the sport has been spinning its wheels. The contests have become less common as the fitness, figure and bikini classes has taken a number of steps up. What appears to be the case is the push for a more feminine look all around the industry, so why is women’s bodybuilding not taking the hint? In 2009, Heather Armbrust finished as the runner-up to Kyle and has a perfect physique to become the next face of women’s bodybuilding. “Although I am muscular, I have still kept my curves,” she said with a smile. With the sport at a crossroads, hopefully the judges take the right curve in the road come September.