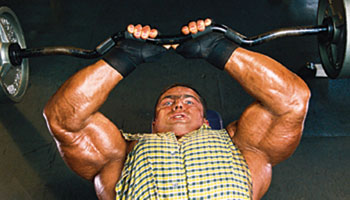 The problem is the name. The meaning may be clearer if we instead said “loosening” or “slack reps” or the “Weider Momentum Training Principle.” Alas, tradition dictates we stick with “cheating,” despite the term’s negative connotations. It sounds like a shortcut for circumventing workout rules, and a dangerous disregard for proper exercise form, but it should be neither. Done correctly, cheating should follow its own rules, safely, and it should enhance correct form, not dismiss it. The following cheat sheet describes the ABCs of deviating from strict exercise technique.

WHY CHEAT Cheating should be done only to push a set beyond strict full-rep failure. For example, if you get eight good reps doing standing side laterals but can’t do a ninth, you can use a little back sway to eke out two or three more. In this way, cheating makes a set harder than if you merely stopped after eight.

Unfortunately, too many bodybuilders cheat to make a set easier. To them cheating merely means sloppy form, which focuses more on momentum and/or uses other muscles to a greater extent than the targeted bodypart. For example, if you go too heavy performing barbell curls and swing the bar up for every rep, you’re working your back, legs and front deltoids more than your biceps and increasing the odds of injuring your arm muscles, tendons and joints.

WHEN TO CHEAT
Cheating is an advanced technique for boosting intensity. Don’t consider adopting it until you’ve been working out for at least one year using only strict exercise form. You need to first master proper technique before you can deviate from it. Experienced athletes who incorporate cheating into their routines should do so sparingly and only after reaching strict, full-rep failure. Don’t attempt to cheat when your energy and focus are low, for that’s when your form can become too sloppy, leaving you at risk for injury.

It’s also important to be aware that cheating isn’t for every exercise. Squats and bench presses, to name two of the most popular lifts, should always be done in strict form; use techniques like forced reps, rest-pause reps and drop sets to push sets of these powerlifts beyond full-rep failure. Abdominals should always be worked strictly. You can alter ab exercises after reaching failure, for example, going from a leg raise to a knee raise, but it’s not truly cheating because you’re not getting assistance from other bodyparts.

In contrast, judicious loosening of form is easiest and safest for biceps and shoulders. The “Cheating Grades” chart (see sidebar) rates bodyparts with scores from A (best) to F (worst) in regard to how effectively and safely you can cheat during the most commonly performed exercises.

HOW TO CHEAT The key to cheating correctly is to use assistance from secondary muscles to get the weight moving, but then to make sure you’re focusing on the targeted muscle(s) at peak contraction.

For example, let’s say you reach strict, full-rep failure at seven reps performing barbell curls. By bending and straightening your knees a little and swaying your back slightly, you can help the bar come up for an eighth rep. Other muscles aid you through the first half of the rep, where the biceps are weakest, but make your biceps do the work on the second half, flexing hard and holding the top position for a count of two. For your ninth rep, you’ll probably need a little more leg and back motion, and still more for number 10, but make your increasingly taxed biceps work as hard as they can. Think of it as a forced rep, where the minor assistance through the sticking point comes from other muscle groups instead of a training partner.

If you’re merely swinging the barbell up and down to the extent that your bi’s become secondary workers, don’t bother. Cheating utilizes secondary muscles to a greater extent than usual, but those muscles shouldn’t become the primary workers.

WHO CHEATS
Not every pro bodybuilder is a cheater. Ronnie Coleman and Jay Cutler loosen their form to get an extra couple of reps during some exercises, but Dorian Yates, to name a third Mr. Olympia, relied on techniques other than cheating to push his sets beyond failure.

Whether they use the principle or not, no champion bodybuilder cheats frequently. It’s an advanced means of enhancing some sets of certain exercises, but overuse it and you’ll rob yourself of maximum growth and increase your odds of injury. On the other hand, if you follow the rules laid out here to make your sets harder, never easier, you, too, can prosper from cheating.