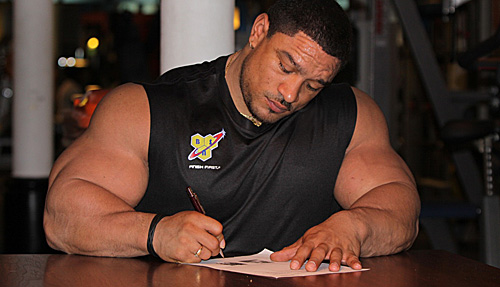 BSN® is pleased to announce the latest addition to its elite roster of athletes, IFBB pro and 2010 New York Pro Champion Roelly Winklaar! 2010 saw Roelly emerge from relative anonymity to take the IFBB by storm in his rookie season, making a splash with a strong debut at the Arnold Classic before taking the top honors in New York and finishing the year with his first trip to the Olympia stage. Along the way, Roelly’s mix of size, conditioning and an undeniably freaky aesthetic made a lot of people around the sport take notice, and BSN® was no exception. With his immense promise and relentless dedication to improve and take his physique to even greater heights, Roelly will make an excellent ambassador for the world leader in nutritional supplementation for years to come.

A native of Curacao who now resides in the Netherlands, Egberton Rulove “Roelly” Etienne-Winklaar first came to national prominence in the US with his overall win at the 2009 NPC Arnold Amateur Championships, displaying a rare combination of massive size and shredded conditioning that heralded big things to come. The dominant win set him up for his big 2010, highlighted by his top-three finish at the Australia Pro Grand Prix and stunning victory at the prestigious New York Pro. With a passion for competition and some valuable Mr. Olympia experience now under his belt, the future looks very bright for Roelly in 2011.

Roelly will make his onstage debut as a Team BSN® athlete at the 2011 Arnold Classic in March, looking to capture the title at the same venue where he earned his pro card and subsequently made his pro debut. He’ll have some tough competition from new BSN® teammate Dennis Wolf along with the rest of the deep field expected at this year’s event, so it should be a Classic in every sense of the word! Once again, BSN® welcomes Roelly as the newest member of Team BSN®, and we look forward to watching him continue to climb his way up the IFBB pecking order and back to the Olympia stage in 2011!