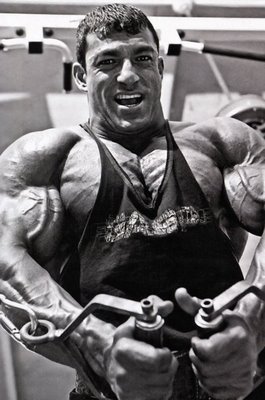 If you want to bet on where Tarek Elsetouhi will place in a pro contest, pick the number six. Of his 10 IFBB Pro League shows since winning the 2008 Arnold Amateur, the Egyptian Elsetouhi has placed sixth in four of them, thus missing the posedown by one placing. Adding that fact with his one pro posedown (5th at the 2008 Europa Super Show), and it merely demonstrates how close he is to fulfilling his potential and contending for titles. Elsetouhi has aesthetically pleasing proportions, and one of his strengths is his chest, built with a classic routine, heavy on barbell and dumbbell basics (for as few as six reps) and void of modern machines.

* “I saw the routine that Arnold was using, and his chest was amazing. So I do basically the same thing. I don’t think you can improve on what he did.”

* “I do two warmup sets of 15 reps before my first set of inclines.”

* “I like to start with inclines because it’s important to get that high area near your neck.”

* “The inclines warm my shoulders and chest up for the bench presses. Arnold also usually started with inclines.”

* “Some people do pullovers for back, but I like to finish my chest workoutwith them, feeling my whole upper body stretch out with every rep.”