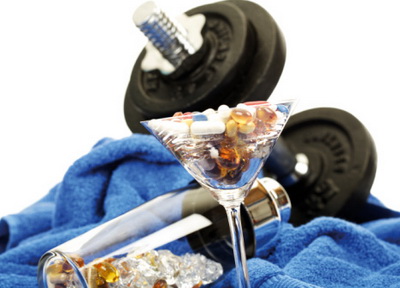 The old favourite time limit of stacking was 6 weeks on and 6 weeks off. It
worked for some, okay, but in the main it was a bit daft because no
sooner had the gains started to show, than the person came off the steroid run,
but it was a popular method that still is used but very seldom now for the
reasons given.

The more normal time spans used today or in the region of 12 weeks give or
take a couple of weeks. I am not being so specific as there is room for
maneuver in most of the stacks used today, but this depends on the type of
training and diet that the individual is doing at the time. Most think they are
taking enough gear, when in fact their bodies are rejecting it before it is even
doing any good, never mind harm!

For example, one guy told me that he was going to go on Anabol, Dianabol AND
HARD, so that he could go through the winter phase, massive. He then told me
the stack that he had planned out. He was to start on 2 per day and gradually
progress up to THE BIG 6! Wow, he really was going for it in a big way, NOT!
The clinical dosage for Dianabol is 50mg per day and that is on it’s own. He did
grow a little, but what a waste of good money. He was not going to seek out
any advise as the berk that had supplied him with the gear down at the local
sweat shop had obviously furnished him with enough information to get the job
done, or so he thought.

If you are going to do the job, then do it properly or forget it. Remember for
instance, Dianabol has been around for many years, around 40-ish, and if the
old boys have not sorted out the right dosages by now, well again forget it, and
if you are going to be cock sure of your information and not bother to seek out
all the information needed to give all the best possible results, then you are
asking for trouble, or the other side of things is that you will get sod all out of
the game.

I don’t give a monkeys what they used to do then, this is now. The gear that is
available, well at least the genuine stuff, is so far advanced that it blows the
mind with regards to results, In the next few paragraphs/pages, I will show you
the most popular AND effective stack for use with good old “Bol. This com
bination is below the recommended required dosage for one simple reason. It
will stack with almost anything! It could be an excellent first timers stack and
will bring fairly decent results WITHOUT any of the totally “bulled up out of all
proportion” side effects that we hear about so often. More on that later, but for
now we will look at a ten week cycle, using DIANABOL or indeed Methandienone
, for that matter. Another excellent oral that is now back in force and giving
some really good gains without problems. This also has been around for some
time.

Suggested Cycle for use with Dianabol or Anabol- 10 weeks only
The total amount of tablets would be 492. This would be exact to the last. It
would be best to take them in three sections throughout the day, not so hard on
the system.

After this cycle, It would be best to take at least four weeks off and give the
body a rest from the gear. Many actually keep on throughout the year , this is
not recommended, or at least wasn’t until the intervention of such wonders as
the oral from Spain called CLENBUTEROL (SPIROPENT) and the injectable
from down under called DRIVE. These two individuals are used in slightly
different ways. The CLENBUTEROL is used DURING the off period and has
been proven to be able to not only maintain the size gained during previous
stacks, but to also induce further gains AND promote better muscle condition to
boot. Brilliant stuff, especially if it is genuine and not the stupid CLENBUTEROL
lookalikes or even soundalikes for that matter. You guys know who you are –
pricks!

The Drive is an oil based injectable with which you would use in addition to the
cycle that you are already on. I will explain it further later but what it actually
does is keep the receptor sites open so that further anabolic activity can
progress. You do have to use quite a lot of it for it to work, but it does that with
no problem whatsoever.