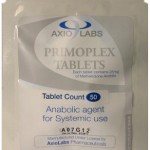 Primoplex 25 by Axiolabs represents an oral steroid which contains 25mg of the hormone Methenolone Acetate per tablet.

Primoplex 25 is an oral version of the injectable Primobolan depot, but instead of the enathate ester, has been attached to a much faster acting acetate ester. Methenolone is 1-methylated for oral bioavailability. That is the reason why these tabs must be taken at least once a day in order to maintain steady blood concentration levels.

Also known as Primo in bodybuilding, represent a popular steroid in this major. Athletes like to take in their cutting cycles. Methenolone Acetate is characterized with low estrogenic proprieties that is why is considered as being mild steroid.

Methenolone Acetate does not produce aromatization in the body and after taking it bodybuilders obtain well defined muscles.

Primo is also a very popular “bridging” steroid, meaning that bodybuilders sometimes use a steady dose of it in between their regular cycles to keep the body in a more anabolic state that natural, but while not keeping natural testosterone shut down as harshly as some other steroids will do.

To obtain better results bodybuilders combine Primo with such steroid as Stanazolol or Oxandrolone.

Average dose for male bodybuilders is 300-800mgs a week. Many athletes use this steroid for about 8-16 weeks. Being mild steroid Primo is loved by women too, in a dosage 50-100 mg.

You can BUY this product at discount prices  from IronDaddy.to because  they proved good themselves on market and have good reputation