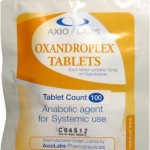 Oxandroplex by Axiolabs is one of the few steroids that are considered as one of the mildest steroids that there is. It is moderated anabolic and androgenic. This drug is also called Anavar. It has its beginning in USA from 1964. At that time as many of anabolic steroids it was used in medicine. It was used mostly for children to stimulate growth and in women to prevent osteoporosis. Later because it cause a strong strength gain by stimulating the phosphocreatine synthesis in the muscle cell without depositing water in the joints and the muscles it became popular between bodybuilders.

Anavar is an oral steroid that consists of 10 mg of Oxandrolone. It was tested in medicine for some years, and it was established that it has minimal effect on liver values even at higher doses. Another not less important thing about Oxandrolone is the fact that it was approved for orphan drug status by the Food and Drug Administration (FDA) in treating such diseases alcoholic hepatitis, Turner’s syndrome, and weight loss caused by HIV, anaemia and hereditary angioedema.

Oxandrolone is one of the very few steroids that does not aromatize into estrogens, at any dosage, which has various advantages for the bodybuilders. Another reason  that make Var popular is that it is known as the steroid for big mass gains, often noted a very good increase in strength. Rather, the mass that is gained by Oxandroplex will be quality gains, and gains that likely to be kept after the steroid is no longer being used. Even it has often been used as a growth-promoting agent in the therapy of boys with growth delays in adolescence

Because of its extremely mild nature, Anavar is also one of the most popular steroids amongst women bodybuilders. It is shown in studies to actually decrease bodyfat during use, making it a great choice for bodybuilders who are in the cutting phase of their training.

To obtain more harder and quality muscles some bodybuilders use combination of Oxandrolone and Halotestin(20-30mg). Another stack that is considered effectively is Oxandrolone and Clenbuterol(120-140 mcg).  Also good results can be achieved by combinind Anavar with Winstrol(50mg/every 2 days), Parabolan, Masteron, Primobolan or Testosterone Propionate (50mg/every 2 days).

Male bodybuilders will typically use Anavar in doses of 50-100mg a day for 6-12wks. It should be taken two to three times daily after meals thus assuring an optimal absorption of the oxandrolone. Women should not take more than about half of that dosage, in other case it  caused side effects such as acne, deep voice, clitorial hypertrophy or increased growth of body hair can occur.
Truly, Oxandroplex is a almost perfect steroid. Anavar has a relatively short half life of about 8 hours. So one may chose to split dosages throughout the day in order to keep blood levels as stable as possible.

You can BUY this product at discount prices  from IronDaddy.to because  they proved good themselves on market and have good reputation