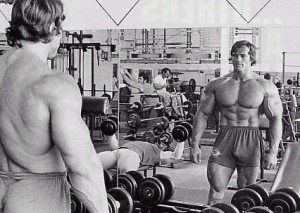 A Detailed Look at the Arnold Schwarzenegger Steroid Cycle

Arnold Schwarzenegger is among the most influential figures in body building history.  Many were inspired by the way he looks.  The big arms, well sculpted chest and those unmatched biceps inspired many to become like him.  Arnold undoubtedly admitted use of steroids during the 1960s.  He became the topic of most newspapers and tabloids as to what specific steroids he used to help him build such great body.

Primobolan is considered to be the weakest steroid in Arnold Schwarzenegger steroid cycle.  However, Primobolan is considered to be an effective fat burner.  This is because of its strong ability to bind with androgenic receptors. Its high affinity to receptors is one of its interesting properties.  Medically, Primobolan is being used to reduce the size of breast tumors.  Dianabol, also known as methandrostenolone, is usually in a pill form. However, it can also be injected under the trade name Reforvit-B.  It is more or less the second anabolic steroid produced. This steroid was also considered as the widely used steroid since its production. It is popularly known as Dbol.

In contrary with Primobolan, Dianabol does not bind with receptors strongly.  It acts by increasing protein synthesis, glycogenolysis, and muscle strength over a short period of time. Deca Durabolin can be naturally present in the body.  Its generic name is Nandrolone and is commonly sold under the trade name Deca Durabolin or Durabolin.  The good effects of Deca Durabolin are its ability to increase appetite, muscle growth and increased production of red blood cells.  It also effects bone growth by increasing bone density.  It is also being used to treat osteoporosis and a certain kind of anemia.  Because of these positive effects, it was given an FDA approval by the United States government.

After almost 30 years, we now have a thorough knowledge about Arnold Schwarzenegger steroid cycle.  Some users modify its cycle and add other drugs such as aromatase inhibitors to attain added desirable effects.