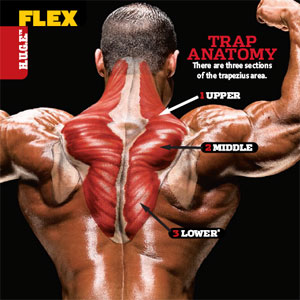 Ask a bodybuilder how he built his traps and he’ll simply shrug his shoulders. This is more truth than joke, for most of us put about as much thought into trapezius training as we do trapeze artistry. Chances are you simply grab a barbell or two dumbbells and move your shoulders up and down for a few sets at the end of your shoulder routine. However, there are many variations of the common shrug. This month, we focus on 10 valuable shrugging exercises you probably aren’t doing. Using these unique lifts, you can map out a fresh approach to the often-stale chore of traps training.

BEHIND-THE-BACK SHRUGS
These are sometimes called ‘Haney shrugs’ because they have long been a favorite of eighttime Mr. Olympia Lee Haney. Instead of holding a barbell in front of your thighs, hold the barbell behind you. This position forces you to keep your scapulas pulled backward throughout the shrug, thus focusing more on yourmiddle traps (although most of the shrugging tension is still on your upper traps). You may find that a Smith machine allows you to better position yourself for this lift.

HOLD SHRUGS
You can dramatically boost the intensity of any shrug by holding the top position of each rep for three to five seconds. Such peak contractions are especially effective for shrugs because, unlike many lifts, there is no lockout at contraction and, with your arms perpendicular to the floor, gravity is maximizing its pull.

LYING SHRUGS
This is the inverse of incline shrugs. While lying face-down on an incline bench or a high flat bench, hold either a barbell or two dumbbells with your arms straight and perpendicular to the floor. Do not shrug your shoulders toward your ears. Instead, while keeping your arms straight, lift the weight(s) by contracting your scapulas. This works your middle trapezius and other muscles of your upper back.

LOW-CABLE SHRUGS
Grab a straight bar attached to a low cable and stand back so the cable, as well as your arms, are at approximately a 45-degree angle to the floor. Shrug your shoulders back and up at the same time. The angle of resistance works both your upper and middle traps (middle back).

OVERHEAD SHRUGS
Although this unique exercise can be performed with either a barbell or two dumbbells, we recommend using a Smith machine for safety and convenience. Begin by holding the bar overhead, as if in the top position of a military press but with your scapulas pulled down as far as possible. Then, push the bar up as far as possible by elevating your scapulas.