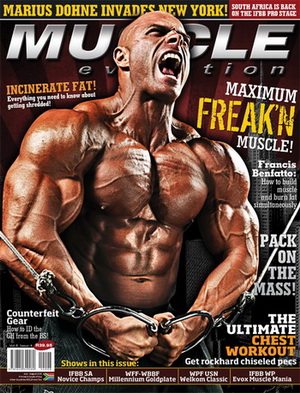 No, I’m not talking about the 2010 FIFA World Cup – I’m talking about the latest issue of Muscle Evolution. For those of you who read the magazine, you’ll know what I’m talking about, as previous issues featured advertising from mostly home-grown South African brands, plus the usual suspects: huge international companies. Gaspari Nutrition, VPX, MuscleTech, and Optimum Nutrition have all been advertising in the magazine for as long as I can remember…but this latest issue had a couple of new faces in the form of several American brands. Purus Labs made their debut along with USP Labs (who had the back cover!) and others…

Naturally, this means all of those companies are now available in South Africa. And truthfully, it makes me feel, after having written for the magazine for the past 3 years, like I was in on the ground floor of something really special. American companies may just be finding out about South Africa (hmmm….perhaps because it’s

been on the television for the past month), but I’ve been here for awhile now. And it’s awesome that American companies are expanding and moving into new markets. As a Americans we’re seeing them as international ambassadors and hosts of the world cup…and not just seeing them as the bad guys from Lethal Weapon 2. (Note: It would be even better if we could find the place on a map, eventually…but we’ll take it one step at a time)

I’m not associated or affiliated with any of these American companies, but since I’ve got a little more experience in-country, the best piece of advice I could give them is to start reading the magazine…understand the market…and to read Andrew Carruthers’ blog. Andrew is the owner and editor of the magazine, and if you’ve just moved into the market, he’s got a great perspective on the way things work down there…reading his blog will give you a crash course on the market. Do you know what a “grey guy” is ? If not, check out Andrew’s blog.

I’d like nothing more than to see more American companies in the market down there – more companies means more competition and in the end, that helps the consumer (*the people who read my column and my blog). And that’s why we’re all here, right? Also, you might be surprised to know that Carl Lanore as well as Matt Cahill (two other Americans) have seen their work published in the magazine. Hell, New York City is in the background of this latest cover!

Who knows, maybe some day Muscle Evolution will have as many pages chocked full of American supplement advertisements as Muscular Development…*