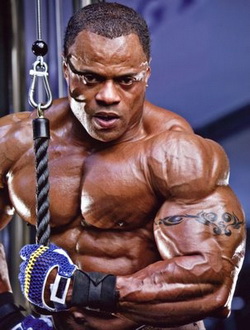 Have we seen the last of “El Matador?” Although he is only 34 years of age, Silvio Samuel may have to hang up the posing trunks due to a recent hospitalization to treat what is being described as an “upper respiratory infection.” There have been much talk that Samuel’s ailments reach further than that and he has appeared unhealthy for some time now, with his issues possibly being heart related.

Samuel was set to compete in the upcoming Pro Bodybuilding Weekly Tampa Pro and has yet to qualify for this year’s Mr. Olympia, a show that he makes an annual appearance at.

Known for competing in multiple contests per year, Samuel may have burnt himself out in doing so. In 2007, Samuel was on stage eight times and won the Europa Super Show. The following year, he cut it down to five and did the same in 2009. Samule came out of the gate strong with an impressive win at the Iron Man Pro but finished out the calendar year by placing 11th at the O.

Perhaps all of the dieting, training and preparation needed at that level has taken its toll on Samuel. Putting your body through that once or twice a year is difficult enough, but more than doubling that can be downright hazardous. That appears to be the case here and Samuel is most likely done for the year and perhaps beyond that.

Prior to being felled by illness, Samuel did not have his contract renewed by either FLEX Magazine or MuscleTech. Perhaps they saw the handwriting on the wall and noticed that he was beginning to lose some of his qualities that have made him one of the regulars on the pro circuit, albeit one of the top second tier competitors. Samuel has been a highly regarded bodybuilder in the smaller shows, but has not had been able to break the top three in either the Arnold Classic or Mr. Olympia. With a mysterious malady, missing time and losing his sponsorships all in one fell swoop, that may be too much for even a warrior like Samuel to overcome.

It would surprise no one if Samuel decides to hang up the posing trunks. His health is paramount and once he recovers, he may not risk doing what he needs to do to become a top tier competitor. Samuel was a fringe player before this setback and what happens next remains to be seen.