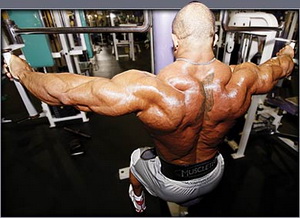 If every day is pec day, chances are your front delts are overdeveloped. Here’s a routine that focuses instead on the rears for better symmetry.

Out of sight, out of mind may well apply to the dirty clothes you stuff into your closet, or the schoolwork that’s jammed into your notebook under your bed, but when it comes to bodybuilding, what you can’t see – namely, the muscles on your backside, including the rear delts, back and hamstrings – can hurt you. If you neglect your rear delts, you’ll not only develop asymmetrical shoulders (which consist of three heads), especially if you like to do lots of chest training, but you’ll also be predisposed to greater risk of rotator-cuff injury because of a muscular imbalance in your shoulders.

Building up your rear delts is as easy as 1-2-3. First, make sure your back workout includes lots of heavy rows, which commonly recruit the rear delts, and ensure you don’t skip back training – especially in favor of more chest work. Second, after your compound exercise(s) for shoulders, like the overhead press, start the isolation portion of your delt training with a move specifically for the rear delts while you’re still relatively fresh. If you always do rear delts last in your routine, you can be assured that elevated fatigue levels mean this area will be undertrained. Third, include a second rear-delt exercise at the end of your routine – after also hitting the two other delt heads – for added emphasis.

While this isn’t a workout you’d want to perform every shoulder day, you could rotate it with routines that emphasize the front and middle delts as this one does for the rear to really push your shoulder training into overdrive.

A shoulder workout that emphasizes the rear delts has three main features:

ONE: Start with a Press
Though shoulder presses work the middle and front delt heads most strongly, they also allow you to push the most weight. Normally you should do them first in your workout.

TWO: Focus on the Rears with a Free-Weight Movement
Once you start your single-joint work for shoulders, choose a dumbbell movement – rather than a less challenging machine exercise – for relatively lower reps. Select a weight with which you fail at eight reps.

THREE: Isolate with a Machine Last
With a machine exercise the only focus is on moving the weight, not balancing it, so it’s less challenging. By setting a higher rep target (12), you’re also working the rear delts with a different relative intensity.