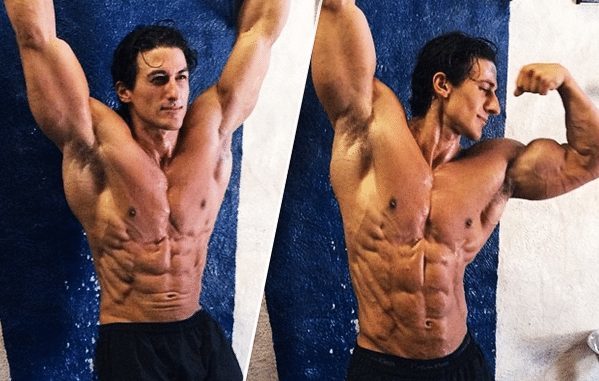 Sadik Hadzovic is an American bodybuilder who has become the champion of Men’s Physique 4 times as he won 4 IFBB events and that’s including one at the Arnold festival back in 2015. Now many of you may wonder – Sadik Hadzovic is… American? Yes, Sadik and his family has originally moved from Bosnia and Herzegovina (former Yugoslavia) after the war. So he’s now an American bodybuilder. Sadik has got a huge amount of fans (more than 2.2 million of followers on his Instagram account alone) and that’s why there is a lot of people who speculate either is he on steroids or not, taking in consideration that he has an amazing physique.

Although Sadik has won 4 times Men’s Physique, he may be more well known for his appearances in the men’s physique category at the Mr Olympia, where he has placed the second on 2 occasions where he was losing out to the nemesis of him – Jeremy Buendia both times. For those who don’t know – Men’s physique is a class for those dudes who are repping the aesthetic look, such as Jeff Seid. It is obvious that these guys are really big and muscular but in the same time they are having a V taper with a tiny waist, unlike Mr Olympia mass monsters like Phil Heath. With this being said, even though they are not as developed as the elite bodybuilders, they are still very jacked, especially compared to mere mortals.

Another thing to take in consideration here is the weight of these guys. It can be a big surprise for someone to hear how much they weight taking in consideration how muscular they appear. That’s because, for example, there’s the champion Jeremy Buendia who is only weighing 164 lbs on the stage. With this being said, it proves that if you are having a tiny waist and some small joints then your muscles do not actually need to be that huge in order to look that they are huge. Talking about classic physique.

Since Sadik has lost out to Buendia  twice, he decided to switch the divisions to Classic Physique, where more mass is being required. Nonetheless, this change in divisions hasn’t helped him secure (at least so far) his much wished title as Olympia champion because he placed only third. In addition to that, Hadzovic is also being sponsored by supplement company that is named GAT and that’s alongside Big Ramy. Let’s check Sadik’s stats. His height is 5 ft 11 with a weight on the stage of 190 lbs (around 86 kg) and a weight off season of 210 lbs (95 kg). These are some data that I managed to find while doing research about Sadik.

With all of this being said, Sadik surely does look like he is a greek god, but this fact made many people think if he has ever juiced in order to look like that. One of the factor that many people started to speculate is because he is as big as Frank Zane.

Here are Frank Zane’s stats: his height is 5 ft 9 with a weight while on the stage of 185 lbs (around 84 kg) and the weight off season is 200 lbs (which is around 91 kg). as much as we can see, Sadik is 5 lbs heavier than what Frank Zane used to be on stage, however he is also 2 inches taller than the ex Mr Olympia champion which is making them both be nearly identical in the size and proportions. Here’s a photo of both of them in pretty much same position: 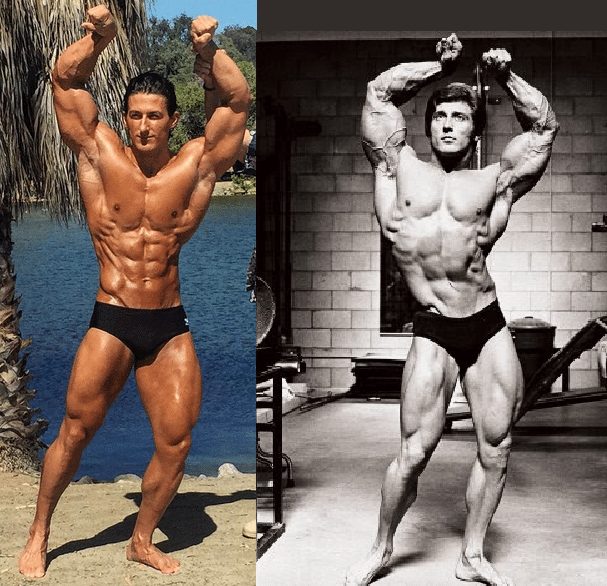 The reason why many people started to speculate Sadik is on steroids since his stats is around the same as Frank is because it is very well known that Frank Zane which is also known as “the Chemist” was taking steroids. That’s why, there are some people who think he SHOULD be on steroids as he’s the same size as the former Mr Olympia who has taken steroids. But I honestly think that this is not a normal way of thinking and it can’t be credible when talking if someone’s on steroids or not. In the era when Zane was on the stage, there were very few people who were taking bodybuilding seriously.

And since the Pumping Iron has been released the numbers of those who do got a lot much bigger. That’s why, nowadays, the number of such people is huge with millions of people who are obsessed with bodybuilding and as a result of that, this type of sport has “genetically evolved”. In other words, due to the fact that more people are lifting weights, we are nowadays finding more genetics freaks out there who are able to build muscles easier compared to the past generations. Now, talking about genetics…

Before Sadik has been a bodybuilder and turned into Men’s Physique, he used to be a model and he obviously was already having a great physique. Here is a picture of what he was looking like back in those days: 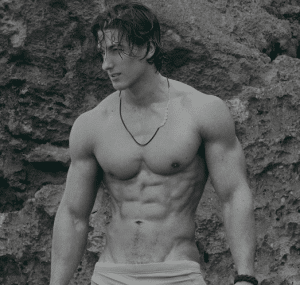 As much as we can see, Sadik was already jacked up even years before he has ever started to step up on a stage… and he is plus or minus the same size now, with a bit of increase only. In short, this is not a guy that has said “I wish to compete” without having any ideas and then has blown up and has gained around 50 lbs of muscles. This guy was already having the genetics of Hercules from the very start. That’s why, with world class genetics – you can get really big.

The picture before/after which raised a lot of hatred

Here is the photo that I am talking about: 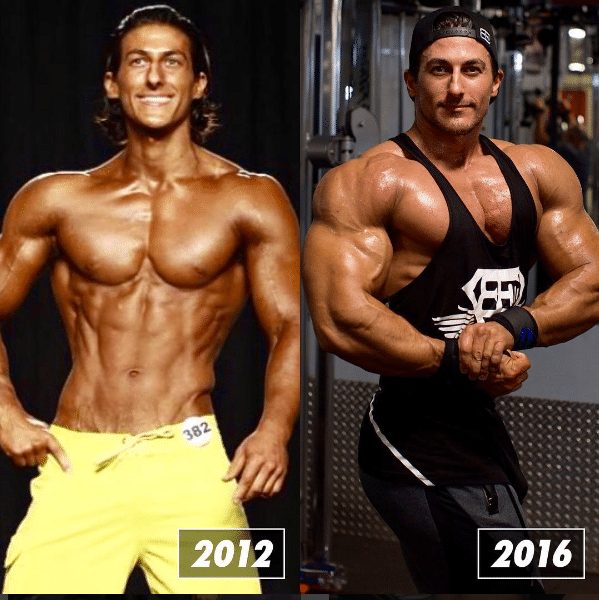 Sadik has received quite a lot of hate when he has uploaded on his social media a photo with him before and after. That was the photo which made him get a lot of additional haters. Lots of people started to call out saying that he is a juicers and as they argued, that’s because this type of gain is unrealistic to get in only a few years as Sadik did. This is why they say that Sadik is on steroids. I do agree with the fact that Sadik does look to be a lot much bigger in that photo comparing the 2012 and 2016 photo. But that’s not a good comparison.

It is very easy to make yourself much more bigger by flexing your arms and getting a huge ass pump in the gym. But a normal comparison would be of him in pretty much same position in both photos (before and after) and by doing some research I did found out that Sadik has uploaded another photo, just a few weeks after he has posted the *after pic*. In that photo he has pretty much the exact same relaxed position as he used to have in 2012. Now, let’s take a look at the before and after picture of him from 2012 to 2016 in pretty much same position: 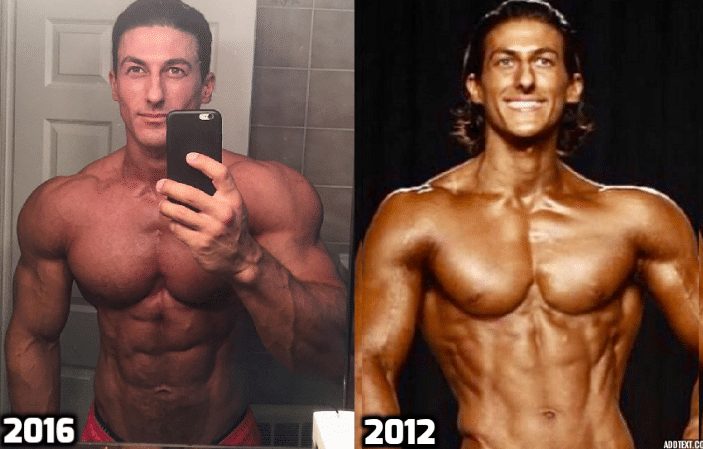 Now, as much as we can see, Sadik is in the exact same position as you can see that he’s by far not as huge as he’s trying to display on the first pic he uploaded. We can see that Sadik hasn’t actually gained too much size in those 4 years. We can see that he did added a little bit, but by far not as much as a lot of people were thinking. That’s why, a very slow gain (as Sadik had) is very normal for any experienced and NATURAL lifter. Taking in consideration that he has first class genetics, lots of years of training AND if he would have used steroids then he would be a lot much bigger than that.

That’s why, it has been the pose/ the angle in the previous photo which was creating the illusion of some huge gains. But Sadik has put very little lean muscle mass from 2012 to 2016 and that’s a natural process. The only actual noticeable difference is the fact that Sadik is not retaining a lot of water in 2016 and his conditioning is overall much better with some enhanced muscle definition, and that’s especially in his delts. This says a lot.

Besides the fact that Sadik has natural timeline gains, he is also having

NO signs of steroid use

Usually, steroid users are having at least some signs of steroids which can include: flushed skin; bloating; vascularity; water retention; acne and many more. But carefully checking Sadik’s body on photos and videos you can see that he has no signs of steroid use. That would be near to impossible to avoid getting any side effects by using steroids.

My verdict of a natty is based on the fact that we do not have enough evidence to say that Sadik has ever taken steroids. And usually, my natty verdicts is based on this as I think a person is taking steroids only when I find evidence if that person doing so. Plus, if Sadik Hadzovic with extremely good genetics, would have taken steroids he would transform into Hulk.

So, the method he got so huge is thanks to his crazy genetics. By taking steroids he would get even bigger and he would get some side effects like gyno, balding, or anything that could indicate he uses steroids. But we couldn’t find anything at all. plus his gains timeline are normal “natural” despite all the hate he got after he uploaded that before/ after picture. Big guys that are naturals are making around 90% of all their gains very early in their bodybuilding career, and after that point on they do not really grow any much bigger. That’s exactly what Sadik had because if we check his before/ after picture in the same position we can see that his muscle mass is pretty much the same. And since we can see that Sadik had normal gains timeline we found nothing indicating he is taking steroids.

If there is any other evidence that I may have missed suggesting Sadik Hadzovic is taking steroids write in down in the comments below. Tell us what do you think about Sadik and if he actually deserved the Mr Olympia champion title to your opinion. Do you aspire to look like Sadik Hadzovic? Just remember that without first class genetics and without using steroids – by far not everyone can look like him. Special thanks to the following sources which greatly helped me in writing of this article: