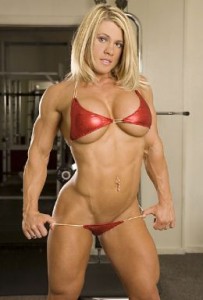 Female bodybuilding is not that uncommon now days but there are still more male bodybuilders than female ones. One reason why this may be the case is that bodybuilding can seriously cramp one’s lifestyle if you’re not dedicated to it and as not all females are willing to give up their lifestyle and figure to undergo the changes that are required there will always be a disparity between the bodybuilder sexes.

What are the Advantages

Jennifer Bender Interview on How She Got Started

Another disadvantage of being a female bodybuilder is the temptation to become more than what your body is capable or more than what you should be. Not a lot of people succumb to the lure of steroids and other illegal substances that can help to enhance and grow the muscles that are essential in this field. A woman bodybuilder might feel the need to enlist such illegal substances or methods in order to make an impact with her size and definition.

Female Bodybuilding is certainly a lifestyle choice many women make without initially thinking of what it may entail to be one and many Female bodybuilders stumble into this field due to the need to be healthy and fit and then find out that they actually like it.

Pros And Cons Of Female Bodybuilding